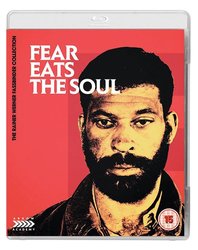 In March 1974 Rainer Werner Fassbinder released what would become arguably his most loved work. Fresh from the Cannes Film Festival, where it had earned its director two prizes, Fear Eats the Soul would soon delight audiences the world over with its tale of romance and racial prejudice in present-day Munich.

Emmi (Brigitte Mira), a widowed cleaning lady in her sixties, meets Ali (El Hedi ben Salem), a Moroccan immigrant in his thirties. Seeking companionship, the pair marry to the outrage Emmi’s family (including Fassbinder himself as her aggressive son-in-law), her friends and her colleagues.

Paying homage to the classic melodramas of Douglas Sirk, in particular All That Heaven Allows, Fear Eats the Soul is a beautifully performed look at intolerance and hypocrisy, and a key film for both Fassbinder and the New German Cinema.