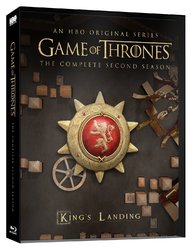 Looking forward getting this collection.

Awesome just preordered with S1, Not a bad price.

Will these be jumbos?

Any idea why only season 1 and 2? Will the remaining seasons be released as well in that form?

blumike said:
Any idea why only season 1 and 2? Will the remaining seasons be released as well in that form?
Click to expand...

That from what I know is not till early next year
Season 3 and Season 4
So you should see these be announced for the UK at some stage
Reactions: blumike

thewoe said:
Will these be jumbos?
Click to expand...

very likely, 5 discs (unless they don't edit new discs)
A

same here, hope they do all of them. maybe those on the right are the first 4 seasons

blumike said:
Any idea why only season 1 and 2? Will the remaining seasons be released as well in that form?
Click to expand...

Surely these will be jumbos?

Lollard2002 said:
I'm in. I wonder if they'd do the other two for November?. Either way that's the first two ordered. I wonder if they'll be identical to the USA ones and include Dolby Atmos.
Click to expand...

New year from what I seen is when Seasons 3 and Season 4 are been released as steelbooks
.
I would take a guess they would be around Jan/Feb/March
If they decide to bring forward the release schedule for seasons 3 and 4
I would say it would be Dec/Jan at the earliest

No Game of Thrones Season 5 on Blu-Ray details have been released yet for the Steelbook
But I would expect it will happen unless these don't sell well
Last edited: Jul 10, 2015
Reactions: harry

Sweet, the season 1 & 2 Steelbooks shall be mine! Rather reasonably priced too IMO.
These are the first UK steelbooks I've been excited about in a while! Pre-ordered

Thanks for letting us know about this @paulboland