Plot: When a single mom and her two kids arrive in a small town, they begin to discover their connection to the original Ghostbusters and the secret legacy their grandfather left behind. 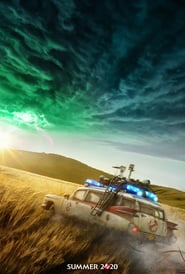 This is everything that I've wanted: something that takes place in the same universe as the originals while also giving tribute to them. It looks like this'll especially give tribute to Harold Ramis and that's just beautiful to me. The cast looks fantastic (please tell me that Rudd suits up in Spengler's uniform and stands alongside Ray, Peter, and Winston in the finale). I really, truly can't wait!


Anyone notice that the big foot that lands on the hood of the car looks identical to the terror dogs from the original GB? Well, that's no coincidence because, apparently, the rift opening in this small town is the same one from the original film. The return of Gozer?!?! That would explain how/why Signourney Weaver's Dana is back in this film.
Reactions: kaw, DADDYCOOL187, Noodles and 1 other person

Not at all what I was expecting, but I really dig it! Has an IT/Super 8 vibe to it. Very excited to see more!
Reactions: kaw, DADDYCOOL187 and tridon

Hmmmm.......not what I was expecting either.

I know it's only a Teaser, but not sure I like the vibe of this. Feels and looks nothing like a Ghostbuster film.

Every time I watch Ghostbusters I think 'New York'. Now they've moved it to a sleepy country town with lens flare sunsets?!

Doesn't feel right at all to me. Feels like Michael Bay is directing.....

Looks Amazing! They might actually save this franchise after all!! Really dig this!


BluSteel2012 said:
Doesn't feel right at all to me. Feels like Michael Bay is directing.....

...Michael Bay? really? I don't get that vibe AT ALL.
There's no massive fireball explosions, no huge waving American flags, no sexy model chicks in a short skirts...