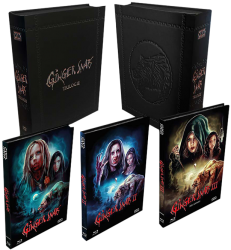 Last edited by a moderator: May 20, 2022
Reactions: Billy Talent

Anyone willing to sell this new, or 'like new', I'm looking to buy. Missed it...
Reactions: Billy Talent

Lenny Nero said:
Anyone willing to sell this new, or 'like new', I'm looking to buy. Missed it...
Click to expand...

Now the cheapest one I can find is on amazon.de for 277€.
Reactions: Lenny Nero

I bought a copy of this leather book edition last year off of Ebay for $450 USD. It is brand new and never removed from shrink wrap. If one of these appears from an Ebay seller located in the USA, they don't last more than 48 hours.
Reactions: Billy Talent and Lenny Nero

Here an unboxing of the leatherbook-one from another ninja

You mean this one?
Or leatherbound book ? Billy Talent said:
You mean this one?
Click to expand...

Exactly was sold out after release immediately, but I preordered it. Never watched it lol, recently watched the Wrong Turn ones until part4, that were released as a Mediabook(pt 1-6) as well. These movies are all very good and nearly everybody says you can only watch the first two ones and the rest is crap, but that´s not true. They all have some highligts be it good actors or nice settings or just a trashy (in a good way) style. No complete errors until now.
Last edited: May 19, 2022
Reactions: Billy Talent

I'd buy that trilogy mediabook too, nice crowded drawn cover, all as I like, but it's also around €200. People are nuts!

I also like the cover, looks decent. You know I´m not the biggest fan of this style, but this one is painted quite good and the cover is more pleasing than the ones from the Leatherbook, where you can be proud that these awful covers are hidden in the book lol
Last edited: May 19, 2022
Reactions: Lenny Nero

Yes I agree, overhyped stuff it is and the prices are eyeroll. Was the same with Descent1+2, where I got the double feature Blu-Ray for €7,99 from Amazon and that with the free delivery offer (otherwise would have paid €4,99 additionally). So it´s €3,50 per movie -the Mediabooks (per part) are 15-20x higher priced. That´s just stupid. I always passed such releases and bought the Amaray instead.

Exception is Wrong Turn, where every part was released in an own keep-case, but each for €20, because they were AT-Imports = €120 and that was the price for the 6-disc mediabook on sale, too. It´s a padded one with nice cover, had a production flaw on 1st page, but saves a lot of space + comes with thick booklet and contains many background informations. Was definitely the better deal and the price continousely increased to €219 at the moment, that I never would pay. It was clear that his would happen, because it just has to be one single part of the amaray releases oop and the Mediabook is back in interest and so it came - 2 of them were sold out immediately and now only one or two are still in stock.
Last edited: May 19, 2022
Show hidden low quality content

Mediabook Everything Everywhere All at Once (4K + Blu-ray Mediabook) [Germany]