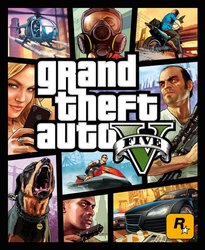 The gameplay consists of a mixture of action, adventure, driving, and occasional role-playing, stealth and racing elements and has gained controversy for its adult nature and violent themes. The series focuses around many different protagonists who attempt to rise through the criminal underworld, although their motives for doing so vary in each game. The antagonist in each game is commonly a character who has betrayed them or their organization or someone who has the most impact impeding their progress.

The series began in 1997 and currently has nine stand-alone games with a tenth one on the way, and two expansion packs for the original. Film veterans such as Danny Dyer, Michael Madsen, Burt Reynolds, Dennis Hopper, Gary Busey, Samuel L. Jackson, Chris Penn, James Woods, Joe Pantoliano, Frank Vincent, Robert Loggia, Kyle MacLachlan, Peter Fonda and Ray Liotta have all voiced major characters in many installments in the series. The name of the series and its games are derived from grand theft auto, a term referring to motor vehicle theft. As of 26 March 2008, the franchise has sold over 70 million copies worldwide; according to Take-Two Interactive.[1]

The games allow people to take on the role of a criminal in a big city, typically an individual who rises through the ranks of organised crime over the course of the game. Various missions are set for completion by the figureheads of the city underworld, generally criminal, which must be completed to progress through the storyline, assassinations, and other crimes feature regularly, but occasionally taxi driving, firefighting, pimping, street racing, or learning to fly fixed-wing aircraft are also involved as alternate adventures, which can be done at any time during the game, with the exception of the periods performing main missions.

In later titles, notably those released after Grand Theft Auto 2, the player is given a more developed storyline, in which they are forced to overcome an event where they are either betrayed and left for dead or experienced an unfortunate event, which serves as motivation for the character to advance in the criminal ladder, and eventually leads to the triumph of the character by the end of the storyline; specific examples of this are the plots for Grand Theft Auto III and Grand Theft Auto: Vice City.

The Grand Theft Auto series, belonging to a genre of free-roaming video games called "sandbox games," grants a large amount of freedom to the player in deciding what to do and how to do it through multiple methods of transport and weapons. Unlike most traditional action games, which are structured as a single track series of levels with linear gameplay, in GTA the player can determine the missions they want to undertake, and their relationships with various characters are changed based on these choices. The cities of the games can also be roamed freely at any point in the game, offering many accessible buildings and minor missions. There are exceptions: missions follow a linear, overarching plot, and some city areas must be unlocked over the course of the game. The use of vehicles in an explorable urban environment provides a basic simulation of a working city, complete with pedestrians who obey traffic signals. Further details are used to flesh out an open-ended atmosphere that has been used in several other games, such as The Simpsons Hit & Run, which has less emphasis on crime or violence.

The series has courted a great deal of controversy since the release of Grand Theft Auto III. This criticism stems from the focus on illegal activities in comparison with traditional "heroic" roles that other games offer. The main character can commit a wide variety of crimes and violent acts while dealing with only temporary consequences, including the killing of policemen and military personnel. Opponents of violent video games, such as Jack Thompson, Senator Hillary Rodham Clinton and Julia Boseman, believe that players will try to emulate this behaviour, while proponents believe it provides an emotional outlet, as such actions in real life would have serious consequences.

The success of the Grand Theft Auto series has resulted in Guinness World Records awarding the series 10 world records in the Guinness World Records: Gamer's Edition 2008. These records include Most Guest Stars in a Video Game Series, Largest Voice Cast in a Video Game (GTA: San Andreas), Largest In-Game Soundtrack (GTA: San Andreas), and Most Successful Entertainment Launch Of All Time (GTA IV).
Click to expand...

Last edited by a moderator: Jul 26, 2018
Reactions: hihi, The Rainmaker and Colombianlove41

Just after GTA IV was released there were rumors that Rockstar had already planned making GTA 5 and had already come up with the story line. Reporters now say that this was true and the game will be released some time in 2010.
From the success of GTA IV it will be extremely hard to succeed it well. It is ofcourse still the record holder for most games sold withing 24 hours.

The story line hasn't emerged yet but there are rumors that Niko Bellic will return!
The game's expected to be released in mid-late 2010 as most Grand Theft Auto's are usually released around summer.


What do you think should happen in Grand Theft Auto 5 (V)?
Do you think Niko Bellic should return or do they need a new character?
Should you be able to change to First-Person-Shooter?

My biggest complaint is the buddy system they added with IV. Other than that, the game was enjoyable. I like how the vehicles handled. More life like.

Om uit te vissen wat er nu in het plaatje te zien is, hebben wij hem bewerkt met fotoshop. In order to fish in what is now the picture shown, we have worked with him Fotoshop. In het plaatje is te zien dat er een datum onder staat: 10.19.10. In the picture to see a date, says: 10.19.10. Wij kunnen dus stellen dat GTA 5 uitkomt op 19 oktober 2010. We can therefore say that GTA 5 depicts October 19, 2010. Maar er is nog veel meer te zien in het plaatje. But there is still much more to see in the picture. Nu wij hem even hebben opgelicht kun je zien dat er een stad is afgebeeld, waar onder andere een brug en gebouwen te zien zijn. Now we have him off you can see a city is shown, where a bridge and other buildings to be seen. Dit kwam ons enorm bekend voor en wij zijn op het internet gaan zoeken of we er achter konden komen waar deze skyline van afkomstig is. This was enormously familiar and we are on the Internet to look if we could find out where the skyline of origin. En we hebben het gevonden! And we have found it! Na een tijdje zoeken kwamen we terecht bij deze foto van de skyline van Miami. After a while we go to find this picture of the skyline of Miami. Oftewel Vice City. Or Vice City. Look I was right its GTA V: Vice City!!!

i see no confirmation...

xtop said:
i see no confirmation...
Click to expand...

I know, I was just seeing who was paying attention in the forums for once.. I feel lonely..

A new post went up on N4G claiming that Rockstar Games has announced the fifth Grand Theft Auto title and it will once again take place in Vice City. However, the story's not true and Rockstar has not announced anything. The so-called picture that the site obtained was actually done by a DeviantArt designer. However, due to disregard from some members on N4G, the post was approved.

So I'm posting this just to stop the rumors and stop people from believing what's not true. Rockstar did not announce Grand Theft Auto V for 2010 and probably won't announce any new Grand Theft Auto until the second episodic piece of downloadable content is out.

If it goes to Miami, I hope they keep it current. The 80's throwback was ok, but eh, I like modern era better.

DaMexiRican said:
If it goes to Miami, I hope they keep it current. The 80's throwback was ok, but eh, I like modern era better.
Click to expand...

80's music FTW! That's why i liked the throwback to Vice City. I actually loved San Andreas because i grew up with the 90's music.

caliblue15 said:
80's music FTW! That's why i liked the throwback to Vice City. I actually loved San Andreas because i grew up with the 90's music.
Click to expand...

Same here. That's why SA was my fave out of the bunch.

could care less where they choose the next game to be at as long as they make it good this time...

San Andreas was the best out of all! I still got the original with the coffee mod bs lol

Horhay said:
San Andreas was the best out of all! I still got the original with the coffee mod bs lol
Click to expand...

I have the orig, but never saw the coffee mod..

I never saw it on the PS2 only on the PC

Horhay said:
I never saw it on the PS2 only on the PC
Click to expand...

i know, i have both

Rockstar was just in the Game Informer office. I can't tell you what they showed me, but it might have been Grand Theft Auto V.
Click to expand...

Andrew Reiner is the editor of GameInformer magazine

Some Evidence of which new city:

At the Rockstar Social Club webpage you can find a ticket for the flight line AIRsol, issued on “Niko Bellic". It grants a flight from Liberty City to San Andreas. Not only is this an indication for GTA 5 playing in San Andreas, it also hints at a comeback of Niko Bellic, but probably not as the main character of GTA 5.

In the mission “Catch the Wave” in GTA 4 you have to capture a boat which was supposed to transport drugs to San Andreas. More evidence on the location of GTA 5?

San Andreas is not the only location Rockstar Games has built so far. Liberty City and Vice City would be candidates for a revisit, too.

However a big part of San Andreas, namely Los Santos aka Los Angeles, already has been built in modern HD graphics. You surely remember Midnight Club: Los Angeles?! Just like GTA 4 the Midnight Club game uses the RAGE engine. So there is already a built Los Angeles within the engine of GTA 5!

Considering the chronology of the GTA prequels, Miami aka Vice City would be the logical location for GTA 5.
GTA 3 featured Liberty City and was followed by GTA: Vice City. Still it remains disputable if Rockstar Games is going to follow that special chronology.

The evidence calls for San Andreas as the location of GTA 5. Coincidence? Conscious deception?! Or clear indications? Maybe in June at the E3 we’ll get solid info from Rocktar Games themselves. Stay tuned for additional info on GTA 5 on Cynamite.com!

I hope it goes back to San Andreas

I'd have to say that I'm looking forward to 5 more than I was 4. And hope 5 is a lot better. Hell, if they cut out that stupid cell phone it's already better 10-fold.