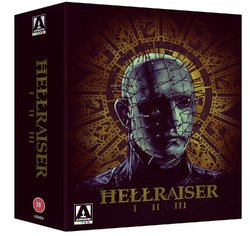 WE HAVE SUCH SIGHTS TO SHOW YOU!

In 1987, master of horror Clive Barker unleashed Hellraiser upon unsuspecting audiences – launching what has proven to be one of the genre’s most enduring franchises and creating an instant horror icon in the figure of Pinhead in the process.

In Barker’s original Hellraiser, Kirsty Cotton (Ashley Laurence) comes head-to-head with the Cenobites – demonic beings from another realm who are summoned by way of a mysterious puzzle box. Picking up immediately after the events of the original Hellraiser, Hellbound: Hellraiser II finds Kirsty detained at a psychiatric institute and under the care of Dr. Channard, a man with an unhealthy interest in the occult. Meanwhile, Hellraiser III: Hell on Earth sees Pinhead and his band of Cenobites let loose in our own world, with terrifying consequences.

Here presented in brand new 2k restorations, Arrow Video is proud to present the first three instalments in one of the most fiercely original horror franchises of all time.

It's not the same release as the scarlet box set

This went down to £9.99 at Zavvi this morning with 'Buy One Get One Free' on Arrow releases. So you could get 2 of these for £9.99. Not surprisingly it sold out pretty fast.

Skush said:
This went down to £9.99 at Zavvi this morning with 'Buy One Get One Free' on Arrow releases. So you could get 2 of these for £9.99. Not surprisingly it sold out pretty fast.
Click to expand...

Damn, that's a bloody good price on this

I like the box cover on this but I still prefer my Scarlet Box over this one. This one is nice and all being that its a shelf with three cases though easier to get to the actual discs than the Scarlet Box set.
Show hidden low quality content