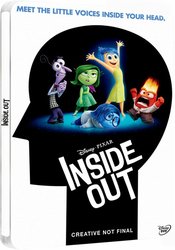 That's another Disney Pixar Steelbook to add to my collection
This has been a big success so far
Box office $491.6 million


Good to see a exclusive Bonus Disc is included

Not seen the movie, but looks good. Will put an order in

Film looks great! Very cool that it comes with an exclusive disc... hopefully there's actually something decent on it. I look forward to seeing the artwork.

I know America gets retailer specific extras, but this is the first I'm hearing of a UK retailer doing it.
Reactions: dfoles

Count me in for this. I watched the movie with my wife and 5-year old and it was really great. Some sad moments, but Pixar always does that, i.e. tug at the heart strings.

That URL is linking me to the general Steelbook page...

Sweet, count me in!!

No spine title side out would be my guess.

I know America gets retailer specific extras, but this is the first I'm hearing of a UK retailer doing it.
Click to expand...

lgans316 said:
Never heard of this. @cooey
Click to expand...

! Is it code, are you held captive and this is your way of telling us you're shielded from the outside world ?

Inside Out premiered at the Cannes film festival, grossed $500 million worldwide, and it's critically hailed as Pixar's best since Toy Story 3 and one of the studio's best films ever. A film worthy of such praise, too


Geek Tragedy said:
No spine title side out would be my guess.

Well, Big Hero 6 did get a spine title (despite not being named Big Hero 6 everywhere in the world, much like Inside Out).

So I'd say my emotion right now could be more like this: Good for Zavvi to have acquired the rights to an extra bonus disc (meaning this steelbook will pop up elsewhere in the world without that disc, probably?). Now if only they started to use stickers, that'd be swell.
Reactions: lgans316

Jesus Christ they're eager, it's not even out in the UK yet!! That being said, I can't wait for this release, and seeing as there's a Zavvi-exclusive disc, I'll have to buy this version and then double dip if Kimchi (or someone else) do an edition!
L

Just seen those glowing reviews at imdb. Looks like Pixar are back on track.
Show hidden low quality content