I'm puzzled as to why Universal (Europe) is reluctant to include 3D discs in its Steelbooks. First, "Jurassic Park", then "Seventh Son", and now "Jurassic World".

augustus said:
I'm puzzled as to why Universal (Europe) is reluctant to include 3D discs in its Steelbooks. First, "Jurassic Park", then "Seventh Son", and now "Jurassic World".
Click to expand...

I just think they realize not everyone is into 3D, so why add an extra disc which results in higher cost when they could push greater volume with just 2D.

Don't need the 3D version. 2D will do. Can't wait to watch this!

The first of many, I'm sure.

blind buy for me. Which I've sadly done a lot lately haha! But well Mad Max has become one of my most incredible movie-experience to date so maybe it'll be the same feeling with this film! Also, huge fan of Parks and rec so Chris Pratt is already enough for me to like this movie !

Been looking at the different posters of the movie and as a front-artwork I'd love this :
( if not the classic dino-logo one so this pic would be great for the back) 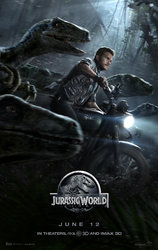 Mod note: for future reference, please post the actual pic not just a link, thanks.
Last edited by a moderator: Jun 11, 2015

Too bad that this will have no 3D disc, but only a 2D disc. I think that it might be obvious that when it only has a 2D disc it will also have a dvd disc.
as Augustus already stated, I also wonder why they do not release the steelbooks with 3D discs.
The movies were released in the cinema in a 3D version, then why not include it in the steelbook release?

Blu ray steelbooks or amaray/slipcovers should have the best possible picture and sound quality available in HD , so this means for me , a 3D version when available (if the film is made in 3D or has a 3D conversion done) , a 2D disc and a blu ray disc crammed full with loads of making of documentaries and so, and NO dvd disc
Last edited: Jun 11, 2015
Reactions: BluSteel2012, augustus and jeremycanrana

This thing had a name change. Does not say it's a steelbook anymore.

Still says this under orders:

This better stay a steelbook or I'll abandon this ship without hesitation!!!
Reactions: javiermendoza

jeremycanrana said:
This better stay a steelbook or I'll abandon this ship without hesitation!!!
Click to expand...

jeremycanrana said:
This better stay a steelbook or I'll abandon this ship without hesitation!!!
Click to expand...

FNAC has it clearly listed as steelbook, let's see.

Hope it'll remain a steelbook though !
Btw loved the film ! Dinos were awesome, Chris Pratt and Omar Sy are amazing too but i wanted to see all the other characters die in agony ...