The first wave of the McFarlane Toys Cyberpunk 2077 range will feature two sizes of the Johnny Silverhand action figure, including a 7-inch and 12-inch version. It will also include a 7-inch (Male) V figure as well. The 7-inch figures will have 22 points of articulation and replicate the likeness of the character, for the price of $24.99. The 12-inch Johnny Silverhand has an MSRP of $39.99. All figures will be available to purchase at major retailers in Spring 2020!

Cyberpunk 2077 will be released April 16, 2020 for PC, Xbox One, and PlayStation 4, with the version for Google Stadia set to launch the same year. The game has won more than 200 awards, including the Golden Joystick Award for Most Anticipated Game. Recently, Cyberpunk 2077 has also received media and fan attention for its star-studded soundtrack.

Cyberpunk 2077 is an open-world, action-adventure story set in Night City, a megalopolis obsessed with power, glamour and body modification. You play as V, a mercenary outlaw going after a one-of-a-kind implant that is the key to immortality. You can customize your character’s cyberware, skillset and playstyle, and explore a vast city where the choices you make shape the story and the world around you

7-Inch Figure
7-Inch scale figure comes with a Base, Johnny’s Guitar with strap and a Bottle Includes bonus ‘Rock-On’ Hand and designed with Ultra Articulation with 22 Moving Parts 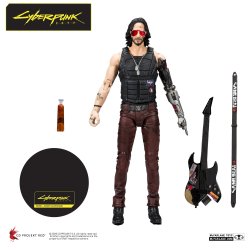 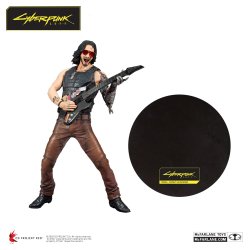 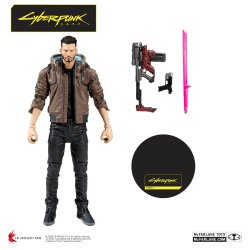