Plot: A young Chinese maiden disguises herself as a warrior in order to save her father. A live-action feature film based on Disney's MULAN. 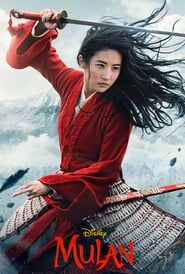 Just means we'll get a 4k blu-ray of the cartoon classic when this hits theatres.

Lollard2002 said:
Just means we'll get a 4k blu-ray of the cartoon classic when this hits theatres.
Click to expand...

and a 4K Steelbook for the animated classic

(and for those wondering, yes that's the actress that plays Mulan singing Reflection)

Not sure when this will be released.
Honestly... maybe they should just put Mulan on Disney+?

Won't happen, they'll just monitor the situation and then announce a new date when they feel is the right time. It also depends what month they release it in cos they don't want 3 Disney films in the same month competing against each other, 2 Disney movies in the same month is okay but 3 is a no go.

Looking at the upcoming movie calendar for this year, Mulan will probably be best released in either Summer/ Autumn (pending on which week they release it). They'll definitely won't release it too late in the year, as people will probably lose interest and they can't spend too much more money on marketing.

They could release this next month seeing as its a quiet month but obviously it depends on the current situation and if China reopen their movie theatres that time.
Last edited: Mar 13, 2020

Seems too early... Place your bets that this gets bumped again.
Reactions: Drum18

kaw said:
Seems too early... Place your bets that this gets bumped again.
Click to expand...

Maybe Disney is hoping China is now "fine" (or better than it was) with the Covid-19 as it's their main market for this specific movie.

Seeing as Tenet and Wonder Woman 1984 have both been delayed, its likely this'll be delayed too.

With August 14th vacant, I wouldn't be surprised if they take that release date.

'Mulan' Heads for Disney+ in the U.S. and Other Select Countries at Premium Price

Customers of the streaming service can pay $29.99 to watch the live-action epic in select markets.

In a surprise development, Disney announced Tuesday that Mulan will be offered to Disney+ customers in the U.S. and other select markets at a premium price of $29.99 beginning Sept. 4.

Mulan is among a handful of Hollywood tentpoles that have seen their spring and summer release dates delayed several times due to the novel coronavirus pandemic.

In addition to the U.S., Mulan will be made available to Disney+ customers in Canada, New Zealand, Australia and many Western European countries.

In territories where it doesn't debut on the streaming service, Mulan will be made available to cinemas.

Walt Disney Co. CEO Bob Chapek assured investors that the company remains committed to the theatrical experience, and that the Mulandecision was made in order to bring the epic adventure to audiences as soon as possible.

“We’re very pleased to be able to bring Mulan to our consumer base that has been waiting for it for a long, long time," Chapek said. "Mulan is a one-off. That said, we find it very interesting to be able to take a new offering to consumers at that $29.99 price and learn from it and see what happens not only in terms of the uptick of the number of subscribers we got on the platform, but also the number of transactions we get on that PVOD offering.”

via The Hollywood Reporter
Reactions: 3Maters

Shocked they bit the bullet. Was hoping to see this in 3D on the big screen. Maybe they'll do a rerelease when things are back to normal.
A

I hope they make the Mulandecision with Black Widow, too.

And some of us were saying they won’t put this on Disney+ and what do they do?

Glad that we’re finally getting the film next month, but disappointed at the same time that we’re not getting a theatrical release here in the UK

would’ve been nice for Disney to let us choose between watching this in the cinema or Disney+.

Read online that Disney needs around 13.5m subscribers on Disney+ to buy Mulan to breakeven, I worked out that they’ll need 33.5m subscribers to get $1bn (just thought I throw that there).