Well as it's looking I'm getting bored with everything and I'm not working now due to certain medical conditions and needed something to occupy my time otherwise I'd go stir crazy. I've decided to get back into painting miniatures, not so much for gaming though, more or less just for the painting aspect of it. Although the miniatures I used to paint way back in my 20's were pewter and very small and so far the ones I've been painting lately have been quite large. As I progress through each figure that I'm painting I'll show you all my progress, sort of a glimpse of what's to come. So without further ado let's get crackin'.

Here's some examples of what I'll be painting. @AcIDc0r3 Have fun! Hope you share some pics of your progress!

bloodsnake007 said:
@AcIDc0r3 Have fun! Hope you share some pics of your progress!

Need to get a nice Airbrush to paint it, that's going to set me back about $100, then a Airbrush compressor which is another $100, a hose and some stuff like Airbrush cleaner and some primer paints and some other stuff.
Reactions: bloodsnake007

I remember once back in school I made a Revell model of the Titanic. My paint brushing skills royally sucked, and in fairness I wasn't too hot on the quality of the model itself. I hear that Tamiya make fantastic model kits.

TheJoker said:
I remember once back in school I made a Revell model of the Titanic. My paint brushing skills royally sucked, and in fairness I wasn't too hot on the quality of the model itself. I hear that Tamiya make fantastic model kits.

Yes Tamiya make some very good models, also Tacom, Meng and Dragon do too. Since the USS Constitution is going to be such a big project I've decided to really take my time on it. I've decided to also work on smaller models on the side so as to not get so overwhelmed by it and perhaps burn out on it and not finish it. I really like tanks and military type vehicles, so I'm going to start tank building on the side. I especially like the Merkava which is Israel's super tank which is undoubtedly is the best tank in the world imho. I need to get some cheap Walmart shelves so I can show off the tanks that I build though. Anyways that's my plan.

AcIDc0r3 said:
Well as it's looking I'm getting bored with everything and needed a new venture to occupy my time and this certainly will. This model is the USS Constitution 1/96 scale by Revell. It'll be almost 3 ft long once finished. The last time I built a model of anything was when I was a kid. I used to build war ships like the USS Missouri and like minded vessels so this will be a completely new experience for me especially the likes of all the rigging involved, that will be very time consuming. I'm estimating it will take me around 6 months to a year to fully complete. So in this thread I'll post my progress and photos to go with it. Wish me luck!

Have you been on ol iron sides? It’s a pretty cool tour. I went like 4 or 5 times while I was in the navy.
Reactions: Savage Clown

SlimJim24 said:
Have you been on ol iron sides? It’s a pretty cool tour. I went like 4 or 5 times while I was in the navy.
Click to expand...

No I sure haven't, the only ship I've been on is the USS Lexington because it's docked at the port near where I live.
Reactions: SlimJim24

Well, I'm getting there. Got my new airbrush in the mail today. A Sotar 20/20 by Badger. Their top of the line model. It comes with a fine needle but I got a package deal that came with medium and heavy spray needles as well so I can do a whole range of airbrushing. 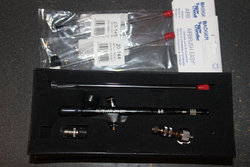 Here's a better image of my airbrush and the extra needles, regulators and tips for it. 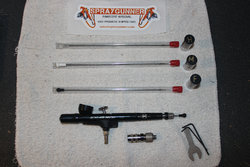 Bought another airbrush. This one is for more general spraying applications like base coating and laying down top coats and stuff like that. The Sotar above is more for laying down precise work and very fine detail. 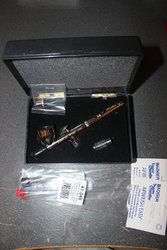 Bought some of the paints that I need. 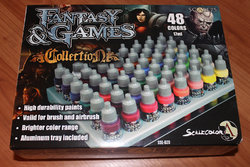 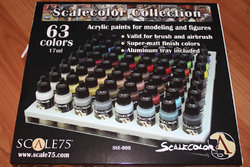 Bought and received today some resin figures to start out with, still waiting for one that's on back order though. Here's some pictures of what a painted model could look like, of course it's not personal and unique unless you paint it the way you want it painted.

Plague Angel is a winged avatar of death. Riddled with the most virulent of diseases known to man, his arrival is the harbinger of doom. Pockmarks and sores cover his body, as not even the Plague Angel is completely immune to the sickness he carries. However, he is immune to their debilitating effects, and appears inured to pain or injury. Those who do not fall to his scythe often find themselves succumbing to illness after even the briefest of encounters. Those souls he does reap with his scythe are absorbed into his flesh. Their mewling cries accompany this winged menace into battle.

Plague Angel was inspired by the song "Angel of Death". He has a unique silhouette with the classic plague theme. While his origins are unknown, his feathered wings and halo esque horns suggest corruption or mockery of divine form.

Plague Angel is cast in pure, unfilled, resin. He stands nearly 23cm (9") to the top of his wing tip, and is mounted on a custom sculpted 50mm by 50mm base.
Click to expand... 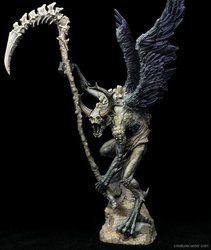 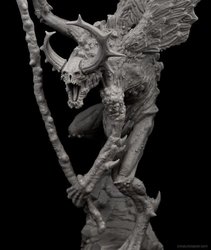 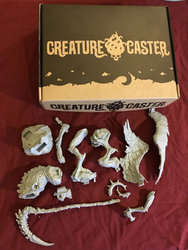 The Lord of Malice is an oddity amongst demon kind. Even the most savage and brutal of demons feel some sort of affinity or kinship with one another, but this is not the case with the Lord of Malice. He feels no such bonds and is said to harbour a deep contempt for all existence, whether it be demonic or mortal in nature. He enjoys building empires only to turn them one against the other and smash them to dust.

A master tactician, and possessed with with a dark charisma that is nearly irresistible, the Lord of Malice has no shortage of followers willing to sacrifice themselves to his dark designs. He cares nothing for those who devote themselves to him, feeling nothing but amusement as they sacrifice themselves for his goals. The Lord of Malice will only be truly satisfied when he stands alone as the last sentient being in all creation.
The Lord of Malice is hand cast in pure, unfilled, resin. He is designed to fit a 60mm round base and has a height of 13.5cm from bottom of his scenic base to top of his wings.
Click to expand... 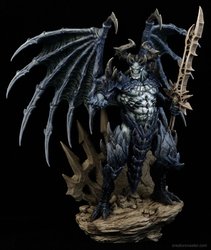 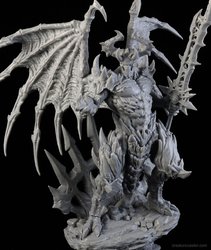 Glutton Demon is a truly monstrous presence on the battlefield. His physical bulk is greater than even the largest of dragons. Such prodigious size is not without cost as he must constantly devour his enemies in order to fuel his unnatural metabolism. His corpulence is host to parasites, bacteria, and viruses that are held at bay, and enhanced in lethality, by his aberrant vigour. Enemies who engage him often find themselves weakened by an unnatural fever as their own immune system turns against them. Organs rupture and blood boils leaving them helpless before this unholy monster. Whether smashed to pulp by his monstrous mace, or brought low by his symbiotic diseases, Glutton Demon finds all their deaths to be delicious.

Glutton Demon is cast in pure, unfilled, resin. He stands 6.25" (16cm) with a massive 9" (23cm) belly circumference making him by far the most massive model we have ever produced.
Click to expand... 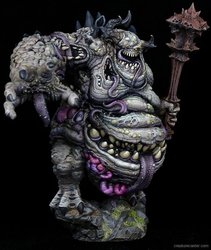 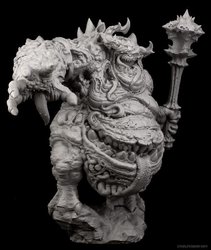 Presenting our first model from the King line of Creature Caster Miniatures. Towering a monsterous 25.5 cm to the top of his wings the King of War still fits on a 100mm round base (full custom base included). We are really proud of this new model and consider him the pinnacle of Creature Caster achievement. Finely detailed armour covers this miniature, complete with heavy plates, and intricate skull mail. His monstrous axe crushes the ground giving him a unique and dynamic pose that maintains incredible stability and strength. Pieces slot together tightly and easily, and come premarked for magnetization or pinning purposes. This is one epic brute that brings a terrifying majesty to the tabletop.

The King of War is hand cast in pure, unfilled, resin. He comes with a custom 100mm round base and has a height of 25.5 cm from bottom of his scenic base to top of his wings.
Click to expand... 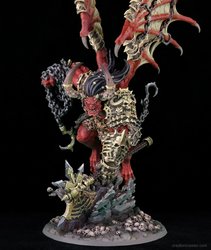 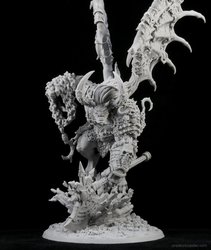 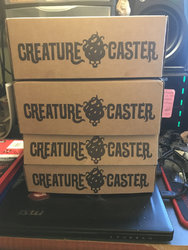 I bought a nice case to fit my airbrush's, needles, nozzles, regulators and needle lube. 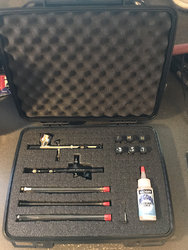 I try to build some WW 2 planes, I did it well but after a while it's took so long time to paint them and so on so I just drop it all.

Maybe I should try again with this stuff but yeah is the time. Did u finish the boat

Anderwin - Stian said:
I try to build some WW 2 planes, I did it well but after a while it's took so long time to paint them and so on so I just drop it all.

Maybe I should try again with this stuff but yeah is the time. Did u finish the boat

No I put the boat off for a while and I’m getting into painting miniature figures first, that way I can get a little more experience under my belt before I take it on.
Reactions: Anderwin - Stian

Finally, got my last miniature figure that was on back order. I waited for over a month for it, I was afraid they were going to return my money and say they couldn't get it. When I checked the Galapagos (Manufacturer) website it has apparently been discontinued, so I got real lucky.

Here's a screen shot of the box. 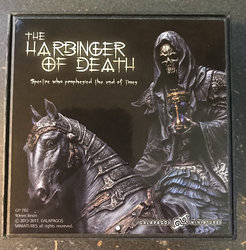 Here're the possibilities of what it could look like (not my photo). 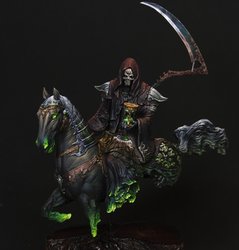 Got just about everything I need, well, enough to get started at least.

Here's some shots of my work area and as you can see I've already started on Death. Just getting him put together and the white paste like stuff is putty to fill in the gaps but once I've primed him it'll be all gray. Then I can base coat him and then do some shading and spot painting, it's all good.

Behind Death you can see my Spray Booth so when I'm airbrushing it catches any overspray and deposits it in a water container. There you can see all my paints, I bought a nail polish rotating display rack and it works perfect for all my paint. There's also my airbrushes and new compressor too. So far I'm loving my whole setup, it's great. 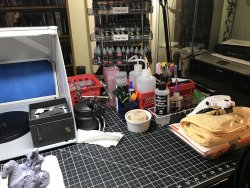 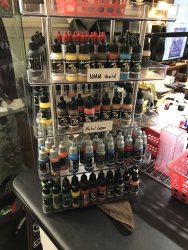 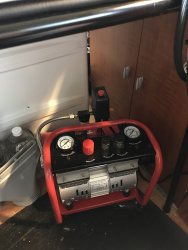 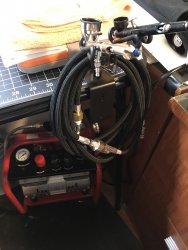 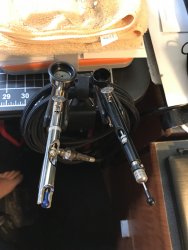