The all-star voice cast includes Ethan Hawke (as Batman), Jacob Bertrand (as Bam the Batmobile), Gina Rodriguez (as Catwoman) and Xolo Maridueña (as Snowy the Snowcrawler), among others. 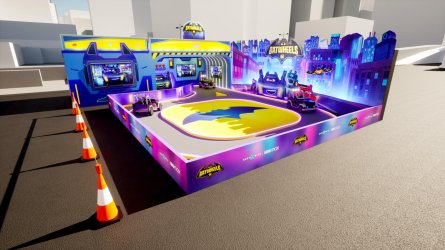 Click here for our NYCC Exhibitor listing & exclusives on the NYCC site. NYCC 2022 TENACIOUS ISLAND THEME: As an entire island of booths, this year we are going with a loose "Island" theme which will celebrate island culture of all kinds - from Hawaiian to Puerto Rican to Filipino, Dominican to...

ALOHA and welcome to Tenacious Island, your toy paradise right in the middle of New York City! Join the Tenacious crew at Booth 1673 at New York Comic Con for good times, great toys and tons of amazing handcrafted and unique art, apparel, pins, stickers and much more!

In booth 1673 you will find exclusive toys in vinyl and resin, custom one of a kind toys, statues, plushes, apparel, pins, original artwork, stickers, prints, and even a children's book. The Tenacious Island booth is by far the most diverse and interesting booth at the entire show!

A second press release will be sent soon that will cover the custom show taking place at the booth, the prototypes that will be on display, the prints and artwork from Hawaiian artists, the appearances and signings and readings that will take place at the booth, and much more! For now, below are the Tenacious Toys toy & collectible exclusives for NYCC:

Tenacious CEO Benny Kline has worked for over a decade to build up the Tenacious Collective into an unmatched destination for east coast convention attendees.

While there is a lot of Tenacious NYCC info to digest, they make it easy to follow along in your favorite way:

Tenacious Toys Exclusives left over will appear here after the show ends: https://tenacioustoys.com/collections/nycc-2022-tenacious-island

Blog posts about each exclusive will be posted on the Tenacious website - these blog posts will contain specific information about the release of each NYCC exclusive product. 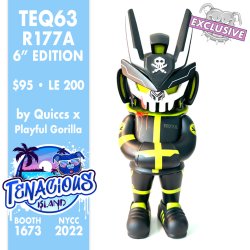 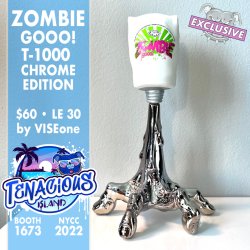 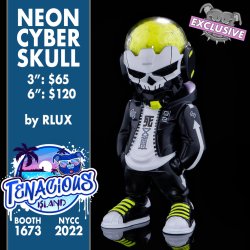 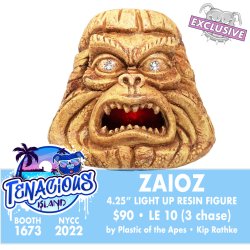 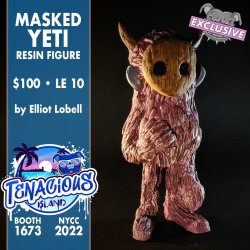 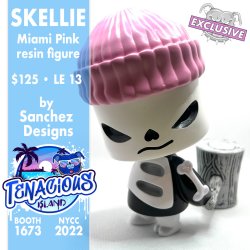 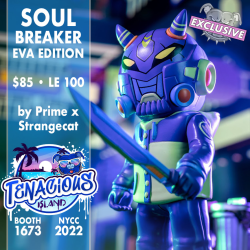 From a spotlight on a new Afrofuturist YA fantasy series from actor and producer Omar Epps (House, This Is Us, Juice, Love & Basketball) and the 30th Anniversary of the beloved Magic Tree House Series to an interactive draw-off for all ages and a conversation between Karen M. McManus and E. Lockhart, two of the biggest thriller authors of our time, we have something in store for everyone.

SPOTLIGHT: OMAR EPPS FOR NUBIA: THE AWAKENING
Friday, 10/7, 6:45 – 7:45 PM | Lit Room 1B-02
Known for his roles on House, This Is Us, Juice, Love & Basketball, and more, popular actor and producer Omar Epps turns to the world of young adult literature with an electrifying Afrofuturist fantasy Nubia: The Awakening. Get the first look at this powerful saga about three teenage refugees from a fallen African utopia who must navigate newfound powers in a climate-ravaged New York City. Moderated by MJ Franklin, Editor at The New York Times Book Review.

TITANS OF FANTASY IN CONVERSATION
Saturday, 10/8, 12:00 – 1:00 PM |Room 405
Join three of the biggest authors in the fantasy genre for a can’t miss conversation only at New York Comic Con! Brandon Sanderson (The Stormlight Archive), Diana Gabaldon (Outlander) and Terry Brooks (The Shannara Chronicles) will take the stage for a one-of-a-kind panel to discuss what it’s like to build iconic worlds that keep fans reading “just one more chapter”.

THE MAGIC TREE HOUSE 30th ANNIVERSARY CELEBRATION
Sunday, 10/9, 11:15 AM – 12:15 PM | Lit Room 1B-02
The #1 bestselling chapter book series turns 30! Celebrate three decades of Magic Tree House adventures with series creator Mary Pope Osborne (Memories and Life Lessons from The Magic Tree House). Learn how an idea for a four-book series about time travel transformed into an international phenomenon that continues to be a childhood favorite and has now expanded to include over 100 books graphic novel adaptations planetarium shows musical theater productions and more! Moderated by series editor Mallory Loehr, EVP and Publisher of the Random House Books for Young Readers Group.

THE “DRAWSOMEST” ILLUSTRATORS: AN INTERACTIVE DRAW-OFF FOR ALL AGES
Sunday, 10/9, 12:30 – 1:30 PM | Family HQ
They bring the pens, YOU bring the inspiration! Join Random House Graphic creators John Gallagher (Max Meow), Liz Montague (Maybe An Artist, A Graphic Memoir), Matthew Holm (The BIG Adventures of Babymouse), and Mark Siegel (5 Worlds) as they bring your ideas to life in this unmissable live draw-off. Moderated by Colleen AF Venable (Katie the Catsitter).

UNRAVELING MYSTERIES WITH KAREN M. MCMANUS AND E. LOCKHART
Sunday, 10/9, 12:45 – 1:45 PM | Lit Room 1B-02
Join #1 New York Times bestselling thriller authors Karen M. McManus (One of Us Is Lying; Nothing More to Tell) and E. Lockhart (We Were Liars; Family of Liars) as they discuss the ins and outs of crafting the perfect whodunnit, from giving your audience psychological chills to mapping out an unpredictable murder mystery. Moderated by Kara Thomas (That Weekend).

WHAT'S HOT IN YA? AN UNDERLINED BUZZ PANEL
Sunday, 10/9, 4:45 – 5:45 PM | Room 406.1
Team Underlined is taking over NYCC with amazing book recommendations! Hear about the best new and upcoming sci-fi, fantasy, thrillers, romance, and more. Don't miss finding out about your next favorite book and author—and the chance to win early reads and prizes! All eyes will be on legendary anime studio Toei Animation when it takes over New York’s iconic Times Square as part its largest ever fan experience at this year’s New York Comic Con 2022. This showcase of franchise properties, including “One Piece Film Red,” “Dragon Ball Super” and “World Trigger,” will offer fans an array of experiences over four days from October 6 – 9 and will encompass celebrity panel, screenings, a Dim Mak pop-up, giant and life sized character displays (image01) and more. Toei Animation’s event line-up kicks off on Thursday, October 6 at 6:00 pm with the U.S. Red Carpet Premiere of “One Piece Film Red,” which opens November 4 in theaters across the U.S. and Canada. The finale takeover event happens Saturday, October 8 at 7:00 pm when Toei Animation and the movie committee will “paint Time Square red” with a visually stunning display (image02) commemorating “One Piece Film Red.” One Piece fans and cosplayers, convention attendees and every day New Yorkers will be immersed in a specially created animation synchronized across numerous digital billboards encircling Time Square. An estimated 14,000 pedestrians will experience the 2-minute looping animation during it’s one-hour long display. Fans attending the Times Square takeover and all other “One Piece Film Red” events throughout the weekend are encouraged to use the hashtag #OPFilmRedNYCC on their social posts. 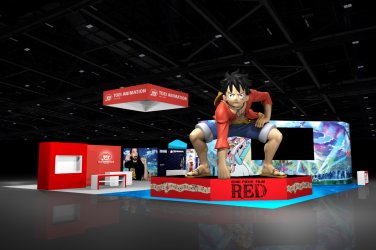 “One Piece Film Red” Panel
10:45 am - 11:45 am
Javits Center at Empire Stage
Join members of the English and Japanese crew as well as some of your favorite voice actors from the English dub. Open to badge holders. 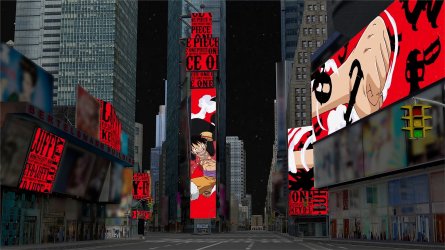 Fans and One Piece cosplayers are encouraged to meet by the Time Square TKTS bleachers by 6:45 pm
Reactions: 3Maters

Available on-line via the company’s website for just a 4 days (October 6th through 9th), this new magnet is inspired by the Darth Vader™ “Pyre” helmet as seen in Star Wars: The Force Awakens™.

Based on a 3D scan of the original film prop, the unforgettable melted helmet is recreated here as a highly detailed magnetic mini sculpture. Each magnet is hand painted with silver tones to highlight the details of the gnarled and twisted mask.

Each piece in this art series is designed, prototyped and produced in the USA. The magnets are solid resin and hand painted by the artists in the Regal Robot New York studio with distinctive faux finishes. They ship ready to display. 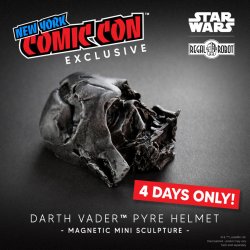 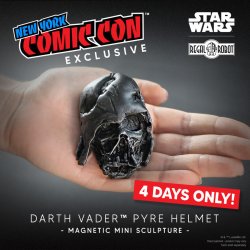 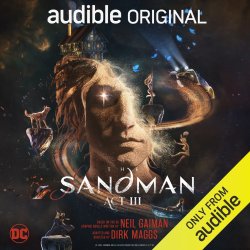 WHAT: Audible Inc., the leading creator and provider of premium audio storytelling, is bringing an immersive and interactive audio storytelling experience to New York Comic Con with The Sandman Dream Portal by Audible and DC, in celebration of the release of “The Sandman: Act III.” The voice of creator, writer, executive producer, and narrator Neil Gaiman will welcome visitors as they enter The Dreaming and embark on a journey through the storylines of “The Sandman: Act III.” As attendees enter the portal, they will find themselves immersed in a surreal dreamscape gallery. Visual installations will encourage exploration and provide abstract visuals that evoke the feeling of special moments from Act III. Audio from those scenes and environmental sound effects will transport attendees directly into the audio adaptation of the New York Times best-selling graphic novel series.

The Sandman: Act III released September 28, 2022 and is available now. Listen at www.audible.com/TheSandman3

The groundbreaking audio production of whatLos Angeles Times Magazinecalled “the greatest epic in the history of comic books” continues. Leading perhaps the best cast ever assembled in audio,James McAvoy returns to voice Morpheus, the Lord of Dreams, inThe Sandman: Act III, the third installment of theNew York Timesbestselling audiosaga.Award-winning audio trailblazer Dirk Maggs adapts the blockbuster DC graphic novel series written by Neil Gaiman (Good Omens) into another fully immersive listening experience, presented for the first time in breathtaking 3D audio.InAct III, we follow Morpheus on a grand journey to take care of family business. He visits with his son Orpheus (Bridgerton’sRegé-Jean Page), an act that brings with it profound consequences. Accompanied by Delirium (Kristen Schaal,Bob’s Burgers), he tracks down their estranged brother, Destruction (David Harewood,Supergirl), the only member of the Endless ever to abandon their post. And at an inn at the intersection of all worlds,a group of travelers are forced together by a storm that threatens to destroy reality itself, with grave repercussions for Morpheus and the rest of the Endless.All the original cast returns, includingKat Dennings as Death, Aidan Turner as Cluracan, and Neil Gaiman himself as The Narrator,joined by Harewood and other new cast members Wil Wheaton (Star Trek: The Next Generation), KJ Apa (Riverdale), Shruti Hasaan (Race Gurram) and more.It’s time to close your eyes and listen. Once again.


ABOUT THE SANDMAN: ACT III
The Sandman: Act III continues to bring to aural life the world of The New York Times best-selling graphic novel, The Sandman, created by Neil Gaiman and published by DC. The third installment is once again adapted and directed by co-executive producer Dirk Maggs and narrated by Gaiman, who also returns as creative director and co-executive producer, with original score from BAFTA Award-winning composer James Hannigan.