Plot: A young driver picks up two mysterious women for a night of party hopping. But when their passengers reveal their true nature, he must fight to stay alive. 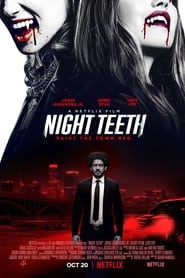 That trailer took a huge twist.
Wasn't expecting this. Looking forward to it!

Seemed like a perfect movie for this Saturday night, but even with low expectations it managed to underperform. First of all, after a voiceover prologue, explaining the major state of things, and telling us how rich, cool, and powerful the ruling vampires are, all we're shown the entire rest of the movie, is a couple of back alley quarrels, featuring 'homies' and some Robin Hood wannabes with crossbows.
The whole 'richness' is represented by 1 Maserati, and 1 luxury house facade. Everything else seems as unimportant, as an any day shootout in the hood, that LA cops usually just lazily scoop up, pack the bodies, and go for donuts, never investigating, assuming city trash wasted each other. Not a world controlling power shift. Characters scoff at the mention of Mafia, saying they're not amateurs, yet top vampire bosses are being taken out by a couple of measly collector girls? There's just 1 guard, or none at all at the locations. It's all just very cheap and stupid.
Now the movie is still watchable, just because of its themes, style, cinematography, music, and being held entirely by the coolness of Lucy Fry, another great Australian pirate girl. The 'main' rapper-actor wannabe has no presence, and the other vampire girl, round-faced girl-next-door, is only good enough to walk down a high school corridor, thinking to herself how cool she is, with noone looking her way for longer than a second.