When a mysterious virus spreads from Haiti to Miami turning people into terrifying, bloodthirsty creatures, a small group of survivors tries to escape from the City Of The Walking Dead.

Update:
- The CHRISTMAS GIFTS for our Phase II backers have arrived today! The first 100 backers who purchase a perk during our current Phase II until November 30th will also get a bonus Nightmare City christmas gift. We still have lots of new, cool rewards and gift ideas on our InDemand page: http://igg.me/at/nightmarecity
The bonus christmas gift packages will be shipped in December so that everyone will hopefully have it under the christmas tree.

- The Nightmare City SURVIVAL KITS will be shipped next week! Sorry for the delay, but we had a problem with one of our suppliers. The content may now vary slightly from our first description and picture, but we have added some more cool stuff and extras to kit

All the best,
TEAM NIGHTMARE CITY

It has been some very busy weeks for us around the AFM, we got a lot of good reactions and renowned companies showing interest in Nightmare City. We will post an update and more news next week in our backstage group on facebook.

We will also start to prepare the christmas bonus gifts and perks for our Phase II backers within the next few days.

- Most of our PHASE II perks (like the crew jacket and the personalized perks) will only be available until Nov. 30, and if you are interested in receiving a bonus Christmas gift you better act quickly because our Christmas special also ends Monday in order to ensure that everyone gets the bonus christmas gift in time.

- Backers who picked a personalized perk (personalized action figure, personalized DVD/BluRay cover, poster or T-Shirt) and/or the “Your photo in the movie” perk will get an email with instructions by Monday.

- The Nightmare City Survival Kits have been shipped last week.

- To our backers who have picked the Comic perk: We apologize for the delay but we had to clear up some legal issues as well as develop the story for the comic, which will actually be a prequel to the movie. However, we will begin with the development and production of the comic as soon as possible.

Thank you for being a part of NIGHTMARE CITY!
- Tom Savini We are happy to announce that Nightmare City now has an European distribution & co-production partner, the renowned Minerva Pictures group.
Minerva Pictures has been operating for more than 40 years in the entertainment and movie sector, both nationally and internationally in the role of producer, distributor and media publisher. In the course of its activities, the company has acquired and consolidated a library now represented by approximately 1,500 titles, for a total, including movies,
TV series and documentaries, of 2,500 hours of programming including productions with stars such as Bruce Willis, John Cusack, Jeremy Renner, Sienna Miller, Christopher Waltz, Dolph Lundgren, 50 Cent, Asia Argento, Ben Foster, Gerard Depardieu, Ornella Muti and Peter Fonda.
Besides they are big fans and connoisseurs of the classic Italian horror & splatter movies.

Minerva Pictures are now striving to move our project and the production forward with their international and US partners.
Together we are also planning to present Nightmare City at the European Film Market in Berlin / Berlinale to international investors and networks, including a big banner in the entrance hall of the EFM. 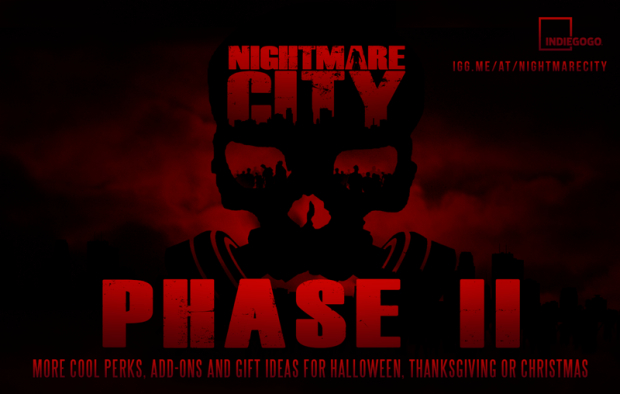 We will ship the bonus christmas gifts for our Phase II backers tomorrow!
We would kindly ask you to not post pictures of the surprise gifts in our group or on facebook or Twitter before Christmas, because some of our backers certainly want to wait with the unpackaging of the gift until Christmas. So please be patient and don't spoil or ruin the surprise by revealing the gifts before Christmas.
Thank you

Help spread the word about the campaign!

@PunkNinja, which perk did you go for?

tridon said:
@PunkNinja, which perk did you go for?
Click to expand...

Nice. I just grabbed the regular Blu-ray from Phase 1. Wanted the SteelBook, but couldn't afford the $70+.
Reactions: PunkNinja
N

i went for signed steelbook with lenti. btw. when will this be out ?

nefilim said:
i went for signed steelbook with lenti. btw. when will this be out ?
Click to expand... HAPPY NEW YEAR, DEAR CITIZENS OF NIGHTMARE CITY!
May the New Year bring joy, peace, health, success and happiness to you and your loved ones!

2016 is going to be an exciting, awesome year, together we will make 2016 the year of NIGHTMARE CITY!

All the best wishes from the Team of NIGHTMARE CITY

Help spread the word about the campaign! Dear citizens of Nightmare City, we have a new, exciting announcement:


After intensively working on the script over the last few weeks, TOM SAVINI came up with so many great, mind-blowing ideas and a new, exciting vision of the remake. That's why we have now decided to follow Tom's amazing vision and to rewrite the current script together with Tom as CO-WRITER to make it more suspenseful and scarier and move into a new, thrilling direction. With Tom now being attached as director, Special FX supervisor, actor AND writer this is now becoming a real Tom Savini masterpiece.

Despite the rewrite of the script we will do our best to stay on target with our current plans and estimated schedule, and we hope we will move forward with the rewrite as quickly as possible, and we will of course keep everyone updated in our backstage group on facebook.

If you have any questions, comments or suggestions please contact us via email at office@monstawork.com

Thank you again for your support, together we will make this an awesome horror movie!

Horror-Theatrical Behind - In theaters TBA