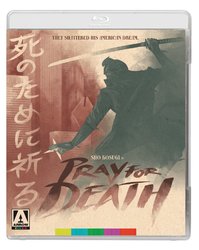 Pray for Death will only be available from US stores, it won't be on our site or any UK sites as we only have US rights so cannot sell it outside the US.
Region: A

THEY SHATTERED HIS AMERICAN DREAM.

Japanese Restauranteur Akira (Kosugi) has taken his wife and two boys to the United States in search of a better life. But their slice of the American Dream is quickly soured when they fall foul of a group of vicious jewellery thieves. Unfortunately for the bad guys, they didn’t count on Akira being a secret black ninja.

A few releases will be USA only as they can't get the distribution rights to do a release in the UK
The same applies to some UK releases some of these won't be available in USA for the same reasons
Reactions: C.C. 95
Show hidden low quality content