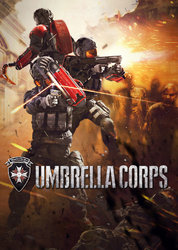 Following the reveal of the game for Japan at TGS earlier this morning, Capcom has announced that Resident Evil: Umbrella Corps (known as Biohazard: Umbrella Corps in Japan) will be released in North America.

The competitive online game will feature quick, intense matches in compact battle zones themed from historic Resident Evil environments. The game utilizes the Unity engine developed by Unity Technologies. Umbrella Corps will be available digitally for an MSRP of $29.99 / €29.99 / £24.99 on PS4 and PC across North America and Europe in early 2016.
Click to expand...

Seems so generic. They just slap the RE name in order to sell more.

I added a poster and fixed the video link

icharlie17 said:
Seems so generic. They just slap the RE name in order to sell more.
Click to expand...

Yeah, it looks more like a CoD game or something.

I added a poster and fixed the video link

I'll definitely be passing on this one.

This can't be a real thing..Can it?This looks horrible.

Lets celebrate the RE anniversary by offering up something that looks like it has about 5% of the RE DNA in it.

This is the issue with Capcom and this franchise. RE6 was a bloated mess of a thing all because they wanted to try and cater to everyone. Now they're simply repeating the process by making a marginally smarter choice of 'remastering'/remaking oldies and releasing this kind of crap that they seem to imagine there's an audience for. I think it was already proven with ORC that they're just slapping the brand on all they can and chasing the COD money they're never going to get. Surely they'd be better off biting the bullet and rebooting the series if they're so dry on ideas... and I say this as someone who usually can't stand reboots either unless they're brave enough to avoid all the winks and ties to the past.
Reactions: jitstark

I never knew this game was powered by the Unity engine.That explains the graphics,But not the horrible idea for a game.
Reactions: Sixteenvolt420