@mllNY I actually got inside the room. Managed to get myself all 4days plus preview....but I messed up doing my friend's info and forgot to put Sat for him

still can't believe I messed that up. None of my other friends got inside and we're missing badges for 1 person now.
Yourself?

@mllNY great to hear man. now we just got to wait for hotelpocalypse

yup, i just got home, literally left right after tickets sold out. Its odd you missed saturday, since if you pressed the preview night check box it automatically selected all the other days with it.

Jack did not get through but hey last year he did. Now as you say onto hotels and flights

@mllNY my two friends actually didn't want preview night so I had to manually check everything off and I was rushing so that didn't help either.

But hey I'm glad one of us go into the room.
Reactions: mllNY

SE: NYC and NYCC are on the agenda but have to get tickets before I consider them on the books

@mllNY just sdcc and nycc for me. Hopefully I can get a pro pass again. Don't think the retail price for nycc badges are worth it.

I'm just looking to go on more vacations/adventures to places then more cons.

@will519 just booked my flight! got a good price from jetblue. My normal flight hours, get in Tuesday AM home on the redeye leaving Sunday night
Reactions: poncholo and will519

@mllNY I usually go to SD on a Fri or Sat before hand and leave on a redeye on Sunday as well. Hoping to score a flight under 500.

will519 said:
@mllNY I usually go to SD on a Fri or Sat before hand and leave on a redeye on Sunday as well. Hoping to score a flight under 500.
Click to expand...

Open reg next Saturday for everyone. Good luck.

I'm booked for Wondercon. SDCC is just no fun anymore. And even a lot of the talent has been moving over to Wondercon over the last few years. Wonercon is definitely more fun. SDCC is more hassle than fun for the last 3 or 4 years. Check out Wondercon next time!
(And L.A. actually has ENOUGH HOTELS to accommodate PEOPLE!!)

Win a trip to SDCC fools! You've been warned
https://www.hidefninja.com/2016/04/04/win-a-trip-to-san-diego-comic-con-from-dark-horse/

Thanks for the tag @mllNY 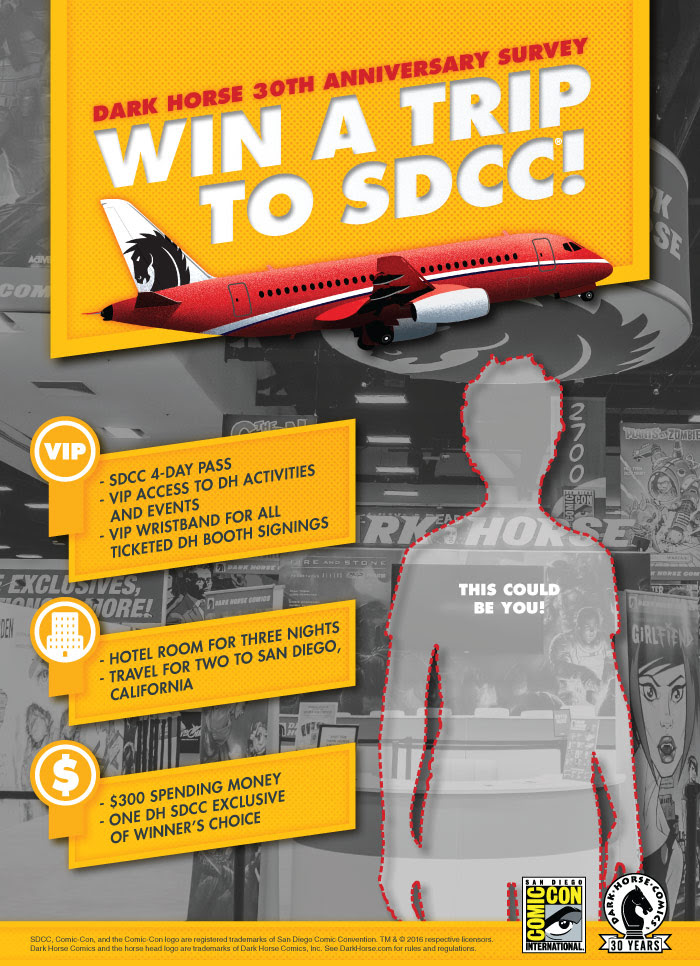 Want to go to the coolest event of the season? Want to go in style? I know you do!

But it’s sold out you say!

Have you ever wanted to attend the greatest pop culture event in the world? Well, Dark Horse Comics is now giving you the chance to party in style at San Diego Comic-Con!

To celebrate Dark Horse Comics’ thirtieth anniversary, we are offering a trip to San Diego Comic-Con that includes:

And what do you have to do to win all this, you ask? Simple: take a five-minute survey about your interests in comics and pop culture! That’s it! There’s nothing to buy!

To the many fans and readers who have been with us over our thirty years in business, we want to give something back to all those who have supported us along the way. And what’s a better way to say thank you than an all expense paid trip to San Diego Comic-Con? So come help Dark Horse Comics ring in thirty years by taking our quick survey and letting us know a little bit more yourself and you may be heading to Comic-Con International this July!

For 30 years, Dark Horse Comics has proven to be a solid example of how integrity and innovation can help broaden a unique storytelling medium and establish a small, homegrown company as an industry giant. Founded in 1986 by Mike Richardson, the company is known for the progressive and creator-friendly atmosphere it provides for writers and artists. In addition to publishing comics from top talent, such as Eric Powell, Mike Mignola, Geof Darrow, Brian Wood, Gail Simone, Stan Sakai, and Guillermo del Toro, and comics legends, such as Will Eisner, Milo Manara, Kazuo Koike, Neil Gaiman and Frank Miller, Dark Horse has developed its own successful properties, such as The Mask, Ghost, X and Barb Wire. Its successful line of comics, manga and products based on popular properties includes Dragon Age, Buffy the Vampire Slayer, Aliens, Conan, Tomb Raider, Halo, The Witcher, Serenity, Game of Thrones, and Avatar: The Last Airbender. Today Dark Horse Comics is the largest independent comic book publisher in the US and is recognized as one of the world’s leading entertainment publishers.