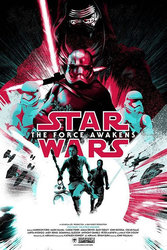 Looks amazing. Awesome that you got one @jcm !
Reactions: luke98, jcm and dan8885

Awesome print. Saw that on Instagram. Austin, the place to be

Matt said he will have some APs in future... stay tuned
Reactions: TobinFrost

he said he won't have many

mllNY said:
he said he won't have many

yeah, sadly, but I'm sure we will see many great star wars prints in the next few months

sry guys, sadly there won't be any APs available

Well, he did have 10 to sell via his Facebook fan page. £100 a pop was a bit rich for my blood though!
Reactions: mllNY

I would have considered that, oh well.

I don't even see his FB

Where I can find this one? Hope I'm not breaking any rules.

charlie1533pr said:
Where I can find this one? Hope I'm not breaking any rules.
Click to expand...

Basically if you didn't go to the Star Wars Marathon in Austin, TX you are stuck on secondary markets like eBay.
Reactions: charlie1533pr

I saw few on ebay. If I remember correctly, price was around 400-500 bucks
Reactions: TobinFrost and charlie1533pr

@jcm @C2V3N Thanks. Today I've received the magazine and the glass and they're awesome. I'll keep searching...

oh man that'd be cool to have the glass.
Reactions: charlie1533pr

I heard since they "gave this away" to who attended it was how they were able to do it officially. That being said, perhaps we wont see an influx of TFA official posters. And if we do later years on this would still be like the OG from theatrical release. (this and DS official poster for release)
Reactions: charlie1533pr

I'm considering selling my copy of this on eBay but I thought I would give people a chance on the forum before then. If anyone is interested just shoot me a PM.

jcm said:
I'm considering selling my copy of this on eBay but I thought I would give people a chance on the forum before then. If anyone is interested just shoot me a PM.
Click to expand...

Finnaly after a long time looking for one I got it. Last time it came destroyed by the postal service but now this one arrived in perfect condition. Ill put it next to my Eric Tan's "Rebirth".
Last edited: Jul 7, 2017
Reactions: Wreck
Show hidden low quality content