Out in time for the upcoming Batman V Superman I guess, probably see WB releasing all of them at some point over the coming months.

Tacozilla said:
Out in time for the upcoming Batman V Superman I guess, probably see WB releasing all of them at some point over the coming months.
Click to expand...

Hope so as I was stupid enough to order the Spanish 'SteelBook' of all 4 without checking it out first!!

Awesome for the original film!

And still no art...
Reactions: gaeljet

denizen said:
And still no art...
Click to expand... 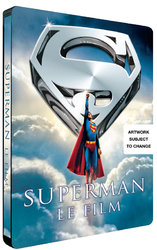 Kuzco said:
Does that help?...

Why of why did they call this Superman the movie

aww nuts, not a bad looking cover except for "le film"
Reactions: gaeljet

Kuzco said:
Does that help?...

When Superman was first released, it was actually titled Superman The Motion Picture.
Reactions: jayce20 and Bunk

I think every home video format ever has called it Superman The Movie on the packaging despite the on-screen title simply being called Superman.

The same thing goes for the Adam West Batman movie. Every VHS, DVD and Blu-ray release I own calls it Batman The Movie on the box. I can cope with that, even though I don't agree with it in either case. The only title changes I truly hate are (Indiana Jones and the) Raiders of the Lost Ark and (House III) The Horror Show (which meant the actual sequel featuring the return of William Katt had to be called House IV).

It's Warner, wonder if we'll see this cover (minus French) elsewhere? I hope so-just watched this during my birthday weekend, and always have and always will love the original Supes! That may be the dumbest thing George Lucas ever did. I can't believe Spielberg let him do that. (Granted, it isn't changed onscreen- but still...)