Plot: A widower suspects that his seemingly perfect adolescent daughter is a heartless killer. 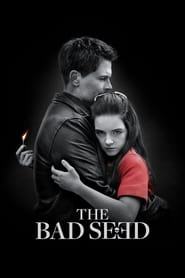 It's a TV movie, strange there's no prefix/category for that. They appear to be still making them, for actual cable channels, not just streaming.
Really awesome movie, excellent acting by McKenna Grace, the girl, whose first and last names seem to be reversed. Her character is all 'reversed' as well, but I couldn't help myself but root and worry for her. Although I'm almost always on the side of the so called 'negative' characters. Wish I had a daughter like that. Wouldn't let her doubt me, would support her in all her 'evil' ways. Anyway, this is what Omen IV wanted to be, save for the supernatural part of it. One thing I didn't like, is her indifference towards animal suffering and death. They wanted to show her as cold, emotionless, but that's a stupid old cliche, that those that torture or/and kill animals first (there aren't any scenes like that here), then go on to kill people. In reality those that love animals are more prone to hating humans, and vice versa, also one doesn't automatically mean the other.
If there were two burning houses, one with a whole family, including children and a grandma, and the other had 1 cat, I'd go save the cat.

McKenna Grace is best, when playing someone moody or mean, really would love to see the sequel she's rumored to be helping write!
One drawback is the really cheap, tv-movie-of-the-week music, gives it a forgotten Lifetime Mystery feeling. Looking up this movie later, it happens to be... a Lifetime channel movie! I guess nothing changes, even after 20 years. Lifetime sounds cheap, as ever.

P.S. This is a remake, or another adaptation, of a 1954 novel, which was made into a film in 1956. The actress, that played the girl in that movie, returned here as a child psychologist, said 'she reminds me of myself'...