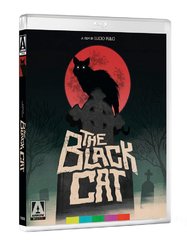 From Italy’s own Godfather of Gore Lucio Fulci (Zombie, The Gates of Hell) comes The Black Cat – a gruesome reimagining of the classic Edgar Allan Poe tale starring Patrick Magee (A Clockwork Orange) and Mimsy Farmer (The Perfume of the Lady in Black).

When a young couple goes missing in a sleepy English village, Scotland Yard Inspector Gorley (David Warbeck, The Beyond) is brought in to assist on the case. But what starts off as routine investigation turns into a murder inquiry when the couple are found dead in mysterious circumstances.

Fusing a classically gothic atmosphere with the decidedly more visceral elements that are the hallmark of Fulci’s films, The Black Cat is a too-often overlooked and underrated entry in the Italian master filmmaker’s canon.