The new Extended Cut will be released on both 2D and 3D Editions. The new cut includes 25 minutes of additional film footage that extends individual scenes, and new scenes. It will also include over nine hours of new bonus features! This Set will get you ready for the December 17th theatrical release of the third and final film, The Hobbit: The Battle of the Five Armies.

The Hobbit: The Desolation of Smaug, Extended Edition is presented in 1080p with DTS-HD Master Audio 7.1 surround. Special features available on both the 2D and 3D releases of the Extended Edition include:
Box Art: 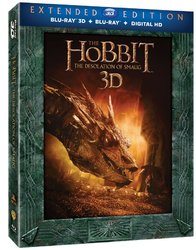 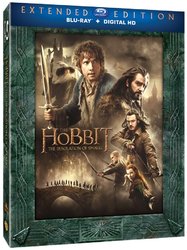 I can't wait to get my hands on this! Smaug on The Cover! Hell Yea!!

I'm definitely getting the 3D Edition! I Love the Emerald color of this one

$55??? and to compare, I got the hobbit 1 hollow slip for $10.
Is this gonna be released thru all major retailers? If it is then i'll have to wait for a price drop...
BTW Smaug edition looks crazy!!!