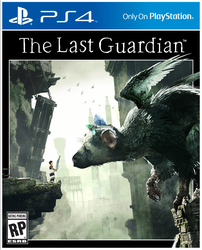 me too, its intersting for now

Never playes SOTC, but after all the good stuff I heard I'd be interested in checking out their next game.

Many of you probably remember that I broke a story in March confirming that Team ICO's next project would be introduced at E3. With the latest leak of "Project Trico", I have had several gamers asking me if we would still see ICO at E3, or if the announcement would be pulled. I just wanted to let everyone know that the E3 trailer is still on schedule, and it is NOT the leaked trailer. So, you can expect to see more in a couple weeks!
Click to expand...

FWIW. doesn't mean that trico isn't the game, just that they wont be showing that particular trailer at E3. which is good news, but nothing really surprising.

it looks awesome, I hope we see some new footage at E3.

WHO ... are these guys? What games have they made before that have such acclaim to make this NEWS to care about?

ICO and Shadow of the Collosus are the big PS2 ones.

WHO ... are these guys? What games have they made before that have such acclaim to make this NEWS to care about?

Shame on you!! lol

I gotta be honest....this game seems a little weird to me.

All of Team ICOs games are weird

Sony Japan: Last Guardian named with US, Europe in mind

Yasuhide Kobayashi, vice president of Sony’s Japan Studio, has revealed that the hotly anticipated PS3 outing The Last Guardian was named as such in order to appeal specifically to western audiences.

Chatting at the recent DICE Summit Asia event in Singapore, Kobayashi outlined the importance of Japanese development studios appealing to overseas territories in an effort to maximise profitability as the home market continues to decline.

"There are so many issues we have to solve, and the biggest challenge is that the market in Japan is shrinking - they key is gaining success in the US and Europe," he stated.

"At the time of the original PlayStation the Japanese market was one third of the global market, and production costs weren't that high - so we were able to generate profit from that market alone."

"But now we're in the era of the PlayStation 3, and the Japanese market is only one fifth of the global market - when it comes to production costs, those are swelling, so it means that unless we gain success in the overseas market our studio will go bankrupt. It's a crisis we recognise," he added.

Kobayashi also divulged that big name Japanese publisher’s such as Sony, Nintendo, Capcom, Namco Bandai and Konami witnessed roughly 70-90 percent of sales generate from the domestic market during the first half of 2008, a fact that highlights the importance of catering to western territories.

He added that Sony has in the past conducted various surveys in regards to flogging its products overseas, singling out PS2 extravaganza ICO as an example, before showcasing two box arts for the game – one for the U.S., and one for Japan. The former includes a bigger title and a clear shot of the male lead character, while the latter incorporated an elaborate art style more suited to the feel of the game.

Despite shifting a respectable 2760,000 units in North America, Kobayashi felt that ICO could have performed better had the packaging been tweaked: "If the packaging was designed differently, we think it would have sold more - in fact on the internet many people have said that the Japanese version was better,” he stated.

As a result, the name of Team ICO’s latest effort, The Last Guardian, was conceived with the idea of appealing to western markets. He also shared his thoughts on budgeting, revealing that he considers a big budget title for PS3 at around the JPY 1-1.5 billion mark, and a small budget offering around JPY 100 million.

Wrapping up, Kobayashi had a stab at what folk consider as a “new game” throughout different parts of the world: “The concept of a game shouldn't be complicated,” he said. “For instance, those people in the US market are very happy to release a game that is something similar to something that's come before, because they think it is easier for people to understand.”

"But actually we don't like this - it's like you're simulating, following suit, combining two titles into one. It seems the definition of a new title is different in the US and Europe to Japan. It means a new genre, that's what we call a new game.”

"But people in the US especially seem to have a little bit of a different view - if a game has a something that's slightly different, people take it as a new game..."

Shown as part of the company’s Tokyo Game Show offerings this week, you’ll find the new snippets towards the end of the video below, which also features a nice recap of designer Fumito Udo’s previous works, such the universally acclaimed PS2 adventure, Shadow of the Colossus.

YES!!! I got to go check this video out! I can't wait for this game!

The Last Guardian designer Fumito Ueda has expressed his desire to see the hotly anticipated PlayStation 3 exclusive receive a simultaneous launch in Japan and Europe.

“I hope to see that, yes,” he told Eurogamer, before admitting he was somewhat disappointed that footage of the game leaked before its planned unveiling at Sony’s E3 press conference back in June.

“Yes, it was slightly disappointing. Everybody was working so hard to make that trailer for E3, staying up the whole night – then the next day it was leaked, and everybody was so surprised,” he said.

Ueda previously expressed interest in seeing PS2 classics ICO and Shadow of the Colossus released on PS3 in a bundle pack similar to SCE Santa Monica’s efforts with The God of War Collection.

For all of those eagerly waiting for Team ICO’s The Last Guardian, you can now head over to its Japanese website to feast your eyes on all the latest (and earliest) screens and videos. We still don’t know when the game will be released, but we do know that if you are anything like us, you can’t wait to get your hands on this gorgeous game.

The PlayStation 3 exclusive was first officially announced last year, and so far we haven’t heard too much about the title. The videos on the website are not new, but it’s encouraging to see the game now has an official site, albeit in Japanese. Hopefully we will start to learn more about the game since its site has launched.

Anything new on this?

Sony Computer Entertainment Europe (SCEE) boss Andrew House has admitted he 'couldn't say' if Team ICO’s The Last Guardian will put in an appearance at either GamesCom or the Tokyo Game Show later this year.

The eagerly anticipated PS3 exclusive was conspicuously absent from Sony’s E3 press conference on Tuesday, which has prompted many folk to assume it’ll show up at a later event.

However, when asked by Eurogamer if the game would show up at GamesCom in August or September’s Tokyo Game Show, House said, “I couldn’t say right now.”

“Having spent six years working in Japan, I can guarantee you people will be hard at work, all hours of the night and day,” he added. “I have not seen it recently, other than what’s been shown publicly.”

Asked why he thought the game was not shown at E3, House replied: “I think the team just made a decision that they didn’t want to talk about the progress on the game or reveal it at this particular stage, and we have to respect that.”

The Last Guardian was announced at E3 2009 and also turned up at the Tokyo Game Show later that year.

It’s worth noting that there are two separate listings for Ico and Shadow of the Colossus in Famitsu. So, this seems to indicate that the games will not be sold together in Japan. But since we’ve seen online retailer listings for Team Ico Collection, the situation will be different overseas.