Last edited by a moderator: Sep 15, 2019
Reactions: DrH, Wreck, nutcaseshy and 1 other person

This will be mine. My favourite Disney Animation film is being released in 4K!!

What’s with the font on the spine?
Reactions: goufcustom and kitsune

That's something different. Kinda like it. But already have 2 editions for Lion King...

Going to get this for sure. Quite like the artwork
B

Would be nice if Disney UK issued steelbook releases of some some of the missing "classics" instead of rereleases on a niche format. Can't say i like the art either, it completerly lacks any of the classic imagry and logos for the film. Why not do a release featurinhg the original poster?
Reactions: Stuc, ROB210866, ethnosax and 1 other person

What a load of shite! Cheap ass looking steel and way too expensive!

Yes I know it’s 4K, but are cartoons really that much better looking in 4K?

Don’t know as I don’t have a 4K TV and don’t plan to get one anytime soon either, but I would of thought cartoons don’t really look much better compared to their Blu Ray versions. It must be minimal surely?
R

Hmm, not too sure about the art, me thinks it’ll wind up looking like etched on bare metal. Gives me hope that there’ll be a standard 4K release though!
A

Strangerbyday said:
Hmm, not too sure about the art, me thinks it’ll wind up looking like etched on bare metal. Gives me hope that there’ll be a standard 4K release though!
Click to expand...

i like the art but nothing will be close in terms of steelbook to the original zavvi or the Asian one........im not saying i wont get it lol

Really not feeling the art. Strange choice for the inside too. I like the illustration but it’s a strange choice

Awful artwork compared to previous ones...actually no, it just looks like it's been slapped dashed together.

The spine font being different, like a Microsoft Word font change.

Come on @zavvi you were doing so well with the new Disney releases, you couldn't have waited until the live action Lion King film was almost out or something. You still have a lot of unreleased Disney and Pixar steelbooks left to go, hell re-release ones with awful/boring WWA like Finding Dory, Inside Out, Monsters University, The Good Dinosaur, Zootopia, Coco, Moana etc

Thats a nice looking steel front, though the sketch stuff all over, with nice 'bossing would be perfect IMO... but doesnt matter either way as I'll stick with 3D (plus I'm now a long way off of upgrading my TV Thankfully with this one no famously daft title treatment . . . in fact, appears to have no title treatment of any kind on the front making this as far as I remember only the second Zavvi Disney classic steelbook to be treated thus (after the drop dead gorgeousness of the original UK FROZEN steelbook) . . . Was not expecting this type of artwork for THE LION KING - what with all the talk of a continuation of the Tom Whalen Disney line . . . was hoping for Whalen artwork to keep THE INCREDIBLES company. . . As for the sketches covering the outside of the steelbook: TBH would have preferred them covering the inside instead . . . even though they appear to be from the pen of the talented Disney artist Andreas Deja who was the Supervising Animator on this film as well as on a host of others:- Finally, despite being a longtime fan of the works of M.C. Escher, not sorry they didn't use this art for the steelbook which - as with most if not all of Escher's trompe l'oeil works - once seen cannot be unseen:- There are still tons of this disaster in stock at Best Buy Canada. 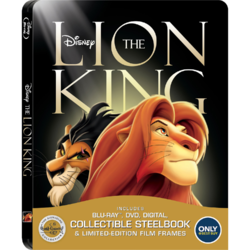