Plot: The story of the New Mutants, a team of mutant heroes comprised of the first graduates from Charles Xavier's school. 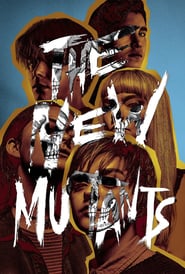 Reactions: Noodles, tridon, Drum18 and 3 others

Anya Taylor is so damn cute

Oh look, her and James McAvoy in another movie together

A girl knows how to impress

James McAvoy's gonna be a busy fellow that year.
Click to expand...

Hopefully the Stark Sisters unite in a future X-Men film!

Who's anya Taylor? Never heard of her. Strange choice of director too

Apparently Maisie and Anya being on board wasn't official until today... but now it's official! The news will come as no surprise to anyone who has been following development on Josh Boone’s The New Mutants movie, but The Hollywood Reporter has just confirmed what has been long rumored: Anya Taylor-Joy (Split, The Witch) and Maisie Williams (Game of Thrones, Doctor Who) are officially set to join the New Mutants cast. As has been long suspected, they’ll play the parts of Magik and Wolfsbane, respectively.

It’s been more than a year since Taylor-Joy and Williams were first linked to the Marvel Comics roles and, since then, no one has really been keeping it a secret. Boone previously shared concept art of Williams as Wolfsbane on Twitter, even going so far as to tag the actress. Taylor-Joy, meanwhile, was very optimistic about taking on the Magik role in conversation with CS earlier this year. She even suggested that the project could reteam her with her Split costar James McAvoy, returning as the franchise’s Professor Charles Xavier. At this time, however, McAvoy is not a confirmed member of the New Mutants cast.

While some might consider today’s trade report “old news,” it’s important to consider that actors schedules do change. After all, previous reports also suggested that Nat Wolff would take on the role of Cannonball. Per, THR’s Borys Kit, that casting has fallen through. He likewise casts doubt on any sort of Xavier appearance.

The New Mutants adapts the monthly comic book series of the same name that launched in 1982. Created by Chris Claremont and Bob McLeod, The New Mutants follows on a group of teenage mutants as heroes in training in the Marvel Universe. The feature is expected to be a departure from the sci-fi-action spectacle of other X-Men films and is instead being described as a “Stephen King meets John Hughes”-style horror movie.

Last November, ComingSoon.net exclusively revealed a leaked concept animatic from the film, which features Wolfsbane, Magic and Cannonball facing Demon Bear. Check it out in the player below.

With a release date set for April 13, 2018, we should be hearing quite a few New Mutants cast updates in the days to come so check back for updates as they become available.
Reactions: Flloydo and Noodles

Not sure how I've only just heard about this. I'm definitely up for it anyway!

Did anyone see ComingSoon's animated concept video that was done for New Mutants? Can't embed to the forum, so check it out here.

tridon said:
Did anyone see ComingSoon's animated concept video that was done for New Mutants? Can't embed to the forum, so check it out here.

With 20th Century Fox’s The New Mutants movie set to go before cameras in July, director Josh Boone (The Fault in Our Stars) has spoken to Entertainment Weekly about the film, confirming the horror tone and other details.

“We are making a full-fledged horror movie set within the X-Men universe,” Boone says. “There are no costumes. There are no supervillains. We’re trying to do something very, very different.”

A secret source close to the production also elaborated on the plot, which focuses on mutants during their teenage years, when their powers are new and they are the most dangerous to themselves and others.

Logline: “Held in a secret facility against their will, five new mutants have to battle the dangers of their powers, as well as the sins of their past. They aren’t out to save the world — they’re just trying to save themselves.”

This continues the trend begun on Deadpool and continued on Logan wherein the stakes are more personal and less global than a typical superhero blockbuster. Unlike those two films, however, The New Mutants is shooting for a PG-13 rating, with a script by Boone and his childhood friend, producer Knate Lee (Bad Grandpa).

Boone stated that he loves the fact that “Fox wants to make all these different X-Men spinoffs as drastically different as they can.” He adds: “You can’t have a bigger nerd or fan making this. It’s so important to me. I’m not the 12-year old who decided to write Stephen King a letter and loved Marvel Comics anymore, but I try to hold myself accountable to that kid. Because that kid is what keeps me from becoming a Hollywood *****. I look back and think: Would he think this would be cool? Would he proud of me? Did I fulfill the dream we had when we were kids? So yeah, you can definitely say I’m excited.”
Click to expand...

A few years ago I would have given anything to get x-men back to Marvel/Disney... Now... It seems like Fox finally knows exactly what to do with these films.
Deadpool, Logan, and now this!? A straight up HORROR movie set in the X-men universe. So freakin' rad.
Even with their TV series. Legion and now The Gifted. Both solid shows.

Fox is killing it.

Can't wait to see this!
Reactions: Flloydo, bloodsnake007, tridon and 1 other person

kaw said:
HERE IT IS!

Oh man, this looks freaking amazing! Wasn't expecting it to be anything like that at all. Super excited for this now, and that's coming from someone who isn't a horror nut.

This looks awesome! Soooo much more straight-up horror than what I was expecting.

I can't wait to see Anya Taylor-Joy as Magik. I think she's gonna steal the show! And the Demon Bear! Ohhh, boy -- when the Demon Bear first appears, it's gonna be horrifying!

A few years ago I would have given anything to get x-men back to Marvel/Disney... Now... It seems like Fox finally knows exactly what to do with these films.
Deadpool, Logan, and now this!? A straight up HORROR movie set in the X-men universe. So freakin' rad.
Even with their TV series. Legion and now The Gifted. Both solid shows.

Fox is killing it.

I feel the exact same way! Then again, I've enjoyed most of what Fox has done with the X-Men films. It wasn't until Days of Future Past until you really started to see that improvement, though.

What the hell did I just watch?! A Horror based X-Men film? F**K YEAH!

Not what I was expecting... at all!