You are using an out of date browser. It may not display this or other websites correctly.
You should upgrade or use an alternative browser.
Added to Calendar: 04-15-22 This would be nice front art...German release for a Taiwanese movie definately means no English subs though Not english! Shame because steel looks very nice. Hopefully it gets down to 9.99 haha

I talked to capelight and can confirm there will be english subtitles.
Reactions: jailbird_joey
S

The Sadness hits theaters on February 3rd, UNCUT!
If my cinema shows this movie, I will definitely attend and share my review.

Concerning the Mediabook/Steelbook release in April in Germany, Capelight Pictures brought to Facebook that they have once again trouble releasing The Sadness due to classification.
They lost another trial.
As of yet Amazon and JPC are allowed to sell the uncut version which will be classified as SPIO.
SPIO means in Germany it is stronger than FSK 18 and on the best way to become indicated.
That is why it won't be sold in stores (although some shops do it anyways) and you can only purchase it online.
If it gets indicated only Austria will be able to sell the uncut version.

Two official red band trailers exist.
I decided to combine the footage of both of them, because each trailer shows scenes that the other trailer misses and vice versa. 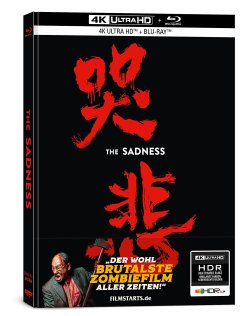 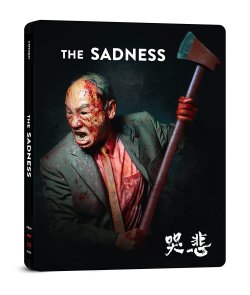 Both editions will be released on April 15th and can be purchased on Amazon or JPC Germany for 32,99€. 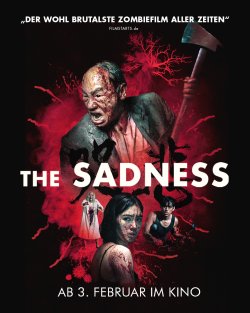 I attended a screening of The Sadness tonight in Germany.
This movie is NOT for everyone and sets the bar high!
I definitely give the movie a 10/10.

Making Of and Behind The Scenes.

SPOILER ALERT!
DON`T WATCH THIS VIDEO IF YOU HAVEN`T SEEN THE MOVIE ALREADY!

Yesterday I came across two videos that feature behind the scences footage of The Sadness.

Most of the scenes are really short and only show seconds of footage, that is why I slowed them down a bit.

I extracted all scenes that can be considered as 'making of' or 'behind the scenes' which were 33 scenes in total and created this video out of them.

Going to see this tomorrow night. Showed the wife the fairly harmless German trailer and she was like "sure, no biggie, let's go watch that. Can't be worse than "Midsommar" or "Hereditary", right?
I was like: you probably will regret bring your wife after....

yelin0318 said:
you probably will regret bring your wife after....
Click to expand...

Yeah, probably......told her we could leave anytime - Steelbook preordered anyway

Lutzo said:
Going to see this tomorrow night. Showed the wife the fairly harmless German trailer and she was like "sure, no biggie, let's go watch that. Can't be worse than "Midsommar" or "Hereditary", right?
I was like:
Click to expand...

So, little update here for all potential marriage counselors out there:

The movie was fine. Pretty solid effects. Some laugh-out-loud moments ("Scanners" reference!!) and generally a pretty bleak atmosphere. The often mentioned disturbing "sexual violence" is mostly verbal and actually pretty ridiculous in the German dubbed version. I think the marketing machine did a good job hyping it up with all the mentions of "the most violent movie ever / last 10 years..." and it is violent for sure, but if you are expecting to be shocked and stunned - you probably won't be. Original Dawn of the Dead and the uncut Land of the Dead were much much worse.

The movie theatre was almost full and the audience was very mixed (geeky Horror nerds, Goths...and one middle aged German movie fan and steelbook collector slightly worried about his pre Valentines Day dating choices with his good-sport wife. We had a good time, laughed a lot and discussed the socially relevant and political parts of it on the way back and thats all one can ask for on a movie night out, right?

unboxing of the steelbook & mediabook

I finally found the time to check out the bonus features coming with the mediabook.
The most interesting thing definitely is the 40 minutes long interview with Rob Jabbaz.
And here´s my question concerning the interview: Do any of you recognize the guy on the right?
I asked Rob (left) about his name today, but even he can´t remember who he was talking to.

The interview is about the whole production, how everything evolved, that Rob wasn´t even in the game of being the director of The Sadness.
Rob is really upfront about everything, which I experienced mself when I talked to him lately.
I like that attitude! He doesn´t talk around things and really addresses director´s he doesn´t like etc., bad editing he came across, people who don´t have a real vision.
He used to underline that with a lot of F´s.

Rob also reveals how exhausted he was after directing the movie, not because of the production, not physically, but mentally.
He slept for 16 hours straight a lot of days when the whole thing was finished.
He put his heart into it and always feared, that the result won´t be perfect enough.
You have to keep in mind, that all the production took place during the pandemic.

Does anybody of you know Rob´s age?
I always forgot about asking him.
He told me, that he lived in Taipei for 14 years and also talked about their government which he detests.

Rob is an interesting interlocutor for sure! 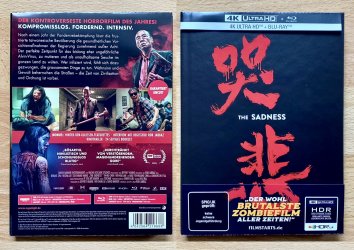 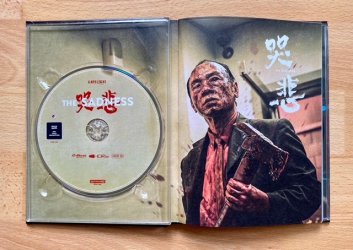 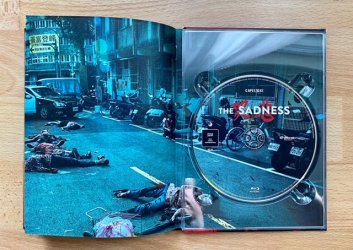 Unboxing video (in English) and movie review (no spoiler!)

Unboxing video (in English) and movie review (no spoiler!)

I created a new dedicated thread to talk about the mediabook edition, if anyone wants to chat separately about this one.