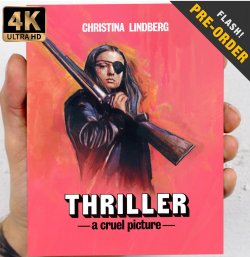 Rendered mute after being sexually assaulted as a youth, Madeleine (sexploitation superstar, Christina Lindberg) lives an isolated existence in her parents' farmhouse. Missing the bus on her way to town one day, Madeleine accepts a lift from a wealthy and charming stranger named Tony. What starts off as an innocent meeting soon takes a nightmarish turn when Madeleine learns that Tony is really a sadistic pimp on the make, who soon enslaves her into his prostitution racket by forcing her to become dependent on heroin. After refusing to service a client, Tony punishes Madeleine by violently blinding her in one eye, forcing her to wear an eyepatch. Despite her limited means, Madeleine secretly saves money to undergo karate and weapons training behind Tony's back. Once she reaches lethal proficiency, Madeleine embarks on a bloody road to revenge against her captors...

From maverick Swedish director, Bo Arne Vibenius, THRILLER – A CRUEL PICTURE is indisputably one of Grindhouse cinema’s crown jewels. Filled with unforgettable moments of sleazy sex and vicious brutality, including one of the most jarring scenes in exploitation film history, Vinegar Syndrome is proud to unleash the definitive THRILLER experience on UHD for the very first time, lovingly assembled from a pristine 4K restoration of the fully uncensored 16mm camera negative, containing never before seen material. This special edition also contains a bounty of exclusive extra features, including the complete original English language version, THEY CALL HER ONE EYE (aka HOOKER’S REVENGE), containing alternate and extended footage not seen since the film’s 42nd Street playdates.

Please note: select indie retail partners (DiabolikDVD, GrindhouseVideo, etc) will have units of this Box edition in stock within the next week or so.
Show hidden low quality content