You are using an out of date browser. It may not display this or other websites correctly.
You should upgrade or use an alternative browser.
Added to Calendar: 01-27-22 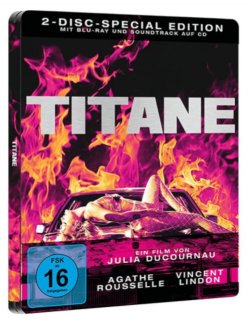 Amazon Germany not live yet

Looks like a badass steelbook. Hope the German text is only on the overwrap.
Reactions: bloandon

Have to keep an eye on this one.

Wish we could've gotten a steelbook for 'Raw' but it's great were getting one for 'Titane'!

It gets also an exclusive slipcover for the standard version, that looks good imo. Unlikely to have English sub/dub, so be wary

I so wanted to like this but ended up hating it. A real marmite movie. Let's have a steelbook for Raw instead.

Any news on when this will be available to reserve in Amazon.de?

JoMaSanRa said:
Any news on when this will be available to reserve in Amazon.de?
Click to expand...

Scraggy said:
Unlikely to have English sub/dub, so be wary

Majority of Koch Media releases have only German Subtitles

Thanks for the info.

Blu-ray SteelBook Friday at 4:19 AM
komor