You are using an out of date browser. It may not display this or other websites correctly.
You should upgrade or use an alternative browser.
C 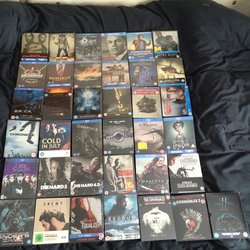 I have decided that after almost 7 years, I am going to get out of the steelbook game and I've been selling off a large quantity of my collection. I still have these ones below available if anyone is interested. The are all unsealed, but they are in mint condition with J-Cards (unless stated) and all have been kept in the plastic steelbook cover boxes/slip covers. All are Region B and UK releases unless stated. Prices are below, I've done my best to be fair (more than happy to negotiate on some of them). Happy to provide pictures of all steelbooks. I am UK based so would prefer to post here but will consider overseas (Although never posted abroad before!)