After a long silence, today Sony finally announced the release date of the upcoming PS4 exclusive Until Dawn, and with it retailers are starting to display a brand new box art.

In the gallery below you can see the European box art for the standard edition, the Extended Edition and the Steelbook Edition (courtesy of Twitter user Until Dawn España and GameStop.

The Steelbook Edition and the Extended Edition have been announced only for Europe so far, so they don’t have a North American box art, quite obviously.
Click to expand... 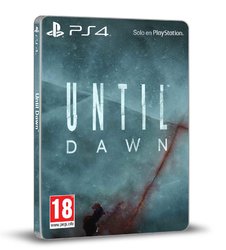 Reactions: ash1115, wxlinkswd, AlphaOmega and 2 others

I want to get this at GAME but

1) I don't even know if the game will be good

2) It's something which COULD go cheaper after release. The title "Until Dawn" is on the slipcase so when you take it off you are left with a bland looking Steelbook with nothing on the cover....EXCEPT the god damn PS4 logo. So yeah they left the PS4 on the Steelbook but put the title on the slipcase.

Could have least put the skull on the Steelbook or something

OMG, at first i tought they were ALL spin slashed

This steelbook is really boring, got the standard extended editon instead. Great game, going to go back and play it again.

Keep checking to see if this is going to go down in price. It's still in stock so hopefully it will go down soon.

[US] HOBBS EVERYTHING MUST GO STEELBOOK SALE