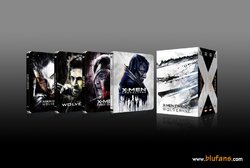 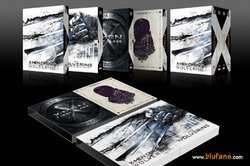 In case people are wondering why Days of Future Past was omitted, I asked Kevin over at the other forum and he said it's because some X-Men films (such as DoFP) don't have Blu-ray releases in China yet.

This set looks sick though! Especially the Wolverine pair together, then all of them stacked next to each other. Very cool.
Reactions: jammmy, tridon, harry and 2 others

I know these are only mock ups but they look pretty poor. I'm happy with my FAC releases
Reactions: Lenny Nero, InAFalsetto, pioneer and 1 other person

cooey said:
I know these are only mock ups but they look pretty poor. I'm happy with my FAC releases
Click to expand...

I like that the FAC releases include all the films as a complete set but the finish on the slips is a little boring for me. I get where you're coming from though. Hopefully they'll look better in hand!

That is one of the coolest incomplete & useless release ever.
Reactions: Lenny Nero, JackRegan, K.i.T and 11 others

will probably pass but love the continuous artwork over the set!
Reactions: K.i.T

Incomplete - no sale
Reactions: Lenny Nero, DADDYCOOL187, JackRegan and 7 others

Skyarcke said:
In case people are wondering why Days of Future Past was omitted, I asked Kevin over at the other forum and he said it's because some X-Men films (such as DoFP) don't have Blu-ray releases in China.
Click to expand...

imo they should've wait to be able to release a complete serie.
Reactions: K.i.T, tridon, eLviS1987 and 1 other person

Agree @cooey At the moment, I can't justify a purchase when something's missing and I already have a complete FAC set.
But I will probably consider it later down the line, when another, more complete set is released

Not impressed with this, first time in a long time I don't like the artwork put out by Blufans, really don't need to buy these again tbh.

no interest in this. dont like the steelbooks. don't like the slips. don't like the incompleteness. the coolest part about this is the back of the slips. this is yet another prime example of the idiotic barriers the studios erect between the retailers and the collectors. Marvel should let... no... not just let.... they should help/encourage the retailers to craft wea for their entire xmen universe of films.

produce wea individual releases, and I would be suckered into buying ALL of them.
Reactions: eLviS1987, steelbobawny and Maximus15
L

With X-Men series, I have decided to keep just the Steels. No premium editions for me.
Reactions: spookz, harry and steelbobawny

I only like The Wolverine/Origins slips. Pass on this as it's pointless to miss DOFP in the prequel trilogy.
Reactions: K.i.T, harry and tridon

Will there be a GB on this?

Unsure at the moment
Reactions: Chee_Kno and montana2974

I mean, as individual releases, they look very cool. As a set, though, it doesn't make much sense. Why even bother doing this if DoFP is absent (which makes the full art piece from the rear of the slipboxes even weirder since it's promo art from DoFP)? And how is it that Apocalypse has a Chinese release before DoFP? They should've just went ahead with a Wolverine 2-pack and left the X-films until all could be done together.

Speaking of which, I do love the Wolverine films together. If this was a 2-pack, I'd be all over it. Then again, the art almost makes it look like he has four claws.
Reactions: GenPion, wjasoncul and rj531

cooey said:
Unsure at the moment
Click to expand...

I have Faith in you buddy

I like them. A possiblity is to sell the steelbooks and replace them.

The blufans x-men first class slip cover take's me back to the 2011 steelbook release from play.com