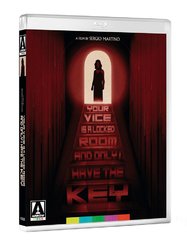 Loosely based on Edgar Allan Poe’s classic tale “The Black Cat”, Your Vice Is a Locked Room and Only I Have the Key, from director Sergio Martino (Torso), weaves the key motifs from Poe’s gothic yarn into one of the most sensual films from the Golden era of giallo.

Notable for giving screen starlet Edwige Fenech her first “bad girl” role, Your Vice Is a Locked Room and Only I Have the Key, with its many unexpected twists and turns, is just as bewitching as its title would suggest.