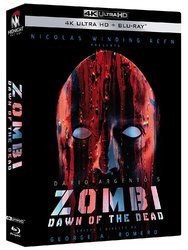 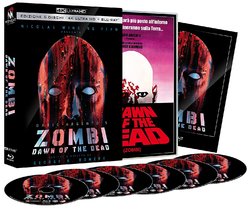 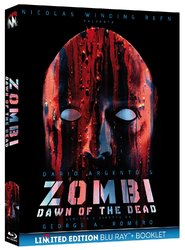 Dario Argento and Nicolas Winding Refn will present the world premiere of the restored version of Dawn of the Dead at the Venice Film Festival, which runs from August 31st through September 10th. The European cut of the 1978 zombie classic will be presented in high definition 4K at midnight on Sept 2nd.

The 115-minute version was edited and curated by Dario Argento for the European market with music by Goblin. The film was restored by Koch Media in collaboration with Norton Trust and Antonello Cuomo.

“I am particularly pleased that Zombi is being re-released after so many years,” said Argento, who produced Dawn of the Dead, released under the title Zombi in Italy. “I have great memories of Zombi because it was so important for my career and for George’s as well.”
Reactions: Sigill, ash333, paulboland and 1 other person

That 4K case looks so thin. How are they going to fit 6 discs in there?

tridon said:
That 4K case looks so thin. How are they going to fit 6 discs in there?
Click to expand...

It's only a mock up photo
It will come in a slipcase and include a booklet
I'm sure there will be more photos soon provided showing the actual packaging and details of extras etc
Reactions: tridon

I would give my best friends right arm for a Steelbook edition of this movie!
Reactions: chunk

Steelbookzombie said:
I would give my best friends right arm for a Steelbook edition of this movie!
Click to expand...

Got my order in for this as well as the 4 disc edition. Not interested in the 4K disc but if this includes 5 BDs then I don't want to miss out.....although I expect the one with 4 discs is a typo and will soon be changed to 5 BDs
Reactions: PunkNinja and paulboland

and...according to this site we have a "real4K" picture (although no HDR) could be worth the extra EUR 15 for the future upgrade of the machine park

Specs are up for this -

cooey said:
Specs are up for this - Interview with tom savini, responsible for the special effects and make-up

- Press conference at the 73rd international film festival of venice

- Hell when there will be 'more post (interviews with Dario Argento and , Claudio Simonetti, Alfredo Cuomo)

- Booklet of 24 pages on film with photos and interviews

Should be interesting to see. DOTD was shot on 35mm which has an aspect ratio of 1.37:1 so this should display the open matte frame that's been scanned in at 4K.
Reactions: tridon and paulboland Thanks for the pics @duckandrun! Looks good!

Mine has been despatched from Amazon.it