It's been exactly 30 years since novelist Bret Easton Ellis introduced us to serial killer Patrick Bateman, and just over 20 since Christian Bale brought the white collar psychopath to life. And death.

Now, Craig Drake has captured the character through AMERICAN PSYCHO's distinctly '80s lens, channeling the ice cold yuppie art aesthetic of the era to create something simultaneously innocuous and dangerous, both nostalgic and new.

"When Mondo asked me to take on AMERICAN PSYCHO, the insane dick-measuring vibes of the business card scene had to be depicted. Patrick Bateman’s true madness is revealed the moment Paul Allen’s card touches his hand. His lust for the exquisite printing is quickly overshadowed by a burning hate. Patrick was holding a knife, not a card. I had to show this.

Getting so pissed over card stock and printing techniques to the point of jealous murder is eerily hilarious." - Craig Drake 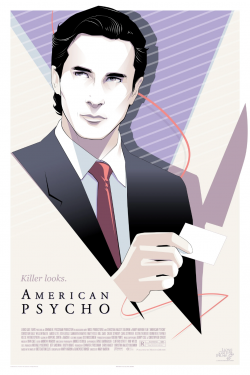 Available Thurs 2/4 at 11am on The Drop.
Show hidden low quality content

Mondo THE LEGEND OF KORRA by Craig Drake

Mondo The Batwing by Craig Drake