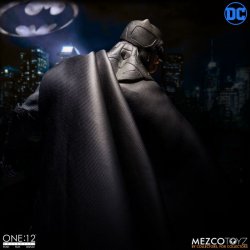 Every Knight has a beginning...and every Knight comes to an end.
Mezco's One:12 Collective Batman Trilogy launched in 2017 with the introduction of Ascending Knight. From his bulkier Bat Suit to his leaner build, Ascending Knight was a Batman compelled by vengeance as he just began his war on Crime.
From there, Batman evolved into Sovereign Knight - a “present day” Batman championing justice. He has honed his skills, methods, and physical fitness to their apex. His Bat-Suit has been upgraded to provide more protection and greater mobility.

As the trilogy comes to a close, we are met with Supreme Knight, an older Batman, driven by perseverance. Developed with the concept that Batman has created and been using the mythology of Batman to his advantage for many years we see a wiser, aged but more battle-torn and darker Bruce Wayne. The Supreme Knight embodies the man who was once propelled by vengeance and justice and now empowered by grit and resilience; he still stands indestructible but not impervious to a life’s work of being Gotham’s savior.

Batman has always been a hero that without super power managed to rise above any challenge, using his humanity as his true super power. Supreme Knight is no different—his heavier suit uses more equipment than ever before. He’s more fierce to compensate for his age, while still struggling with his own inner demons.
But we all know this is not the end of Batman, just the close of our final chapter in a trilogy that we had the privilege of telling through the One:12 Collective. We all hope you enjoyed it as much as we have and appreciate you taking the ride with us.

Mezco’s One:12 Batman trilogy concludes with Batman: Supreme Knight. This is Batman towards the final years of his campaign against the...