Yesterday, we announced a new 3XLP release of the COBRA KAI soundtrack... you didn't think we'd forget about a poster, right?

Tomorrow, alongside the soundtrack release, we will have a new COBRA KAI poster, featuring artwork by Matt Ryan Tobin. We love this show: it's got a ton of heart and nimbly plays with nostalgia, while confidently charting its own path. We're thrilled with Matty's work across the entire project and hope you like it, too.

And remember: it doesn't matter if you’re a loser, a nerd, or a freak. The only thing that matters is that you become badass.

Poster available Wednesday, 5/12 at 12 PM Central on The Drop.

From Matt Ryan Tobin:
"As a massive fan of COBRA KAI, I honestly just let the show art direct the poster. I wanted to create something Johnny Lawrence himself would proudly hang in the Cobra Kai Dojo.

"He'd want to be front and center, towering over LaRusso but most importantly ... he'd want to look bad-ass. However, Daniel plays an integral role in the composition, symbolizing balance in his mission to bring peace between the two dojos." 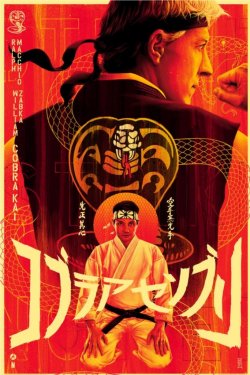 Mondo Scott Pilgrim Vs. The World by Matt Ryan Tobin