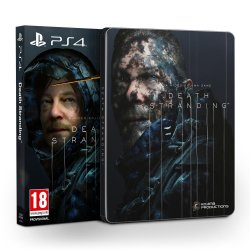 Wonga said:
This’ll come with a slipcase too!

Hope that comes in the collectors edition aswell considering the price

Got the collector's edition the other day after someone canceled their preorder. I was really losing hope of getting it.

Hmm think I might cancel my CE for this now that it's been confirmed to come with a slip box... the new steel design looks loads better too!
Reactions: vexred
M

Custom made by me I got excited thinking that was official. Nice work!
Reactions: Marcoanfelo
M

I forgot to show inside Flat matte steelbook with spotgloss on the title / streaks, and on "Kojima Productions" on the back: Guess the collectors edition didn't get the slip case then :/

So, what do you all think of the game?

yeslek said:
So, what do you all think of the game?
Click to expand...

It's a weird one.

I mean, the story is legitimately weird, but it's also weird gameplay-wise. I'll get right into it for a bit, but then I'll become bored-stiff and I have to shut it down for a while. Then I get back into it, get bored, rinse and repeat. Apparently the game tells a great story, but being that it's open world, the story is continuously put on hold and padded-out for pointless missions. I personally miss Kojima doing linear games because he's a great storyteller. There's no enough story so far to be open world.
Show hidden low quality content
You must log in or register to reply here.
Share:
Facebook Twitter Reddit Email Link
Top Bottom