When the moon rises, and evil prowls the street, a vengeful spirit awakens. Crackling with Hellfire and consumed by a dark power, no nemesis can withstand the wrath of… The GHOST RIDER!
Marvel Legends is celebrating the 50th Anniversary of the Ghost Rider franchise with a new type of HasLab project: Robbie Reyes Ghost Rider and the Engine of Vengeance!
50 years ago, the supernatural super hero first rode off the pages of Marvel Comics and into the realm of Marvel legend. From Carter Slade to Johnny Blaze to Danny Ketch to Robbie Reyes, many names have taken on the Ghost Rider mantle, fueled by vengeance and a sick ride. The next Marvel Legends HasLab project will bring another Ghost Rider to life like never before, starring a vehicle unlike any on your shelf. With Hasbro Pulse, fans can bring the Spirit of Vengeance into our realm -- and it won't even cost you your soul!
· Engine of Vengeance vehicle inspired by the supernatural muscle car in Marvel Comics All-New Ghost Rider (2014)
· Premium 1:12 scale car design measuring approximately 18.5 inches long, 7.5 inches wide, and 5.5 inches tall
· Vehicle fully equipped with 20 LEDs for scorching Hellfire light-up effects in tires, engine, grill, tailpipes, and driver's seat headrest (requires 3 AA batteries, not included)
· 6 flame trail effect pieces for tires and tailpipes
· 2 Brimstone Risers for dynamic car display
· 4 interchangeable tires and 1 additional engine to convert Engine of Vengeance from Hellfire Mode to Street Mode
· Exclusive Robbie Reyes Ghost Rider 6-inch scale figure with comic-inspired accessories, including real metal chain This crowdfunded project will run from September 16, 2022, to 11:59pm ET on October 31, 2022. If successful, the project will begin shipping around Fall 2023.
*Early-Bird Special Offering: Robbie Reyes Human-Form Figure:
If the HasLab Marvel Legends Engine of Vengeance campaign reaches its minimum goal of 9,000 backers before 11:59 PM EST on September 23, 2022, all project backers before the campaign ends on October 31, 2022 will receive the exclusive Marvel Legends Robbie Reyes Human-Form 6-Inch scale figure.

If the campaign does not reach its minimum goal of 9,000 backers before 11:59 PM EST on September 23, 2022, the Early-Bird Special Marvel Legends Robbie Reyes Human-Form figure will not go into production.

Fire Up the Engine of Vengeance
The only thing more iconic than a Ghost Rider is their signature vehicle. For Robbie Reyes, it's a black muscle car possessed by the spirit of Elias Morrow that transforms from sleek antique to Hellfire-powered Engine of Vengeance. The Marvel Legends 6-inch scale Engine of Vengeance comes with 18 total pieces for converting the car between two modes -- Street Mode and Hellfire Mode. Inspired by Robbie Reyes's car that can burst into flames of Hellfire, the vehicle comes equipped with 20 LEDs and 7 accessories designed to make the car appear to be crackling with the flames of vengeance.

Street Mode
The Street Mode version of the vehicle is a classic black muscle car inspired by the All-New Ghost Rider comics. It comes with a classic silver supercharged engine that snaps into the hood of the car, as well as four standard tires made from vinyl for a realistic texture. These pieces are used without LED effects and can be removed and replaced with illuminated Hellfire pieces.

Hellfire Mode
Comes with 11 translucent Hellfire Accessories designed to transform the vehicle into a true Engine of Vengeance. Includes four transparent orange Hellfire tires and four Fire Rim accessories designed to make it look like the wheels have flames coming out of them. Two Exhaust Flame pieces can be plugged into the tailpipes for more flame effects. When you attach the flaming Hellfire Engine to the hood of the car and press down, LEDs are activated for fire-inspired lights. All 11 translucent Hellfire Accessories glow when the LEDs turn on to give the impression that the car is powered by flames from the Spirit of Eli. LEDs flicker and pulse to look like crackling fire. Press down on the Hellfire Engine to cycle through different light sequences and supercharge up your display case.

Beyond Hellfire
In addition to the Hellfire Accessory pieces, there are further light-up sections to give the Engine of Vengeance a supernatural look. There is an LED light behind the driver's seat headrest that will light up behind Ghost Rider's head, making it look like the flames coming out of his skull are on fire when he's inside the car. The grill and taillights of the car also glow with LEDs for a total of 20 LEDs throughout the vehicle. Snap in the Hellfire Engine to get all the lights glowing. (Requires 3 AA batteries. Not included.)

Marvel Legends' Most Premium Vehicle Yet
Buckle up for the first Marvel Legends HasLab vehicle. Designed to enhance any Marvel Legends collector's shelf, the Engine of Vengeance vehicle features a premium design aimed to delight Marvel fans and car enthusiasts alike. With impressive display capabilities, the vehicle has premium detailing, finish, and functionality. The vehicle is designed at a 6-inch scale, measuring approximately 18.5 inches long x 7.5 inches wide x 5.5 inches tall. The driver's and passenger side doors both open and close to fit a 6-inch figure in each seat. The passenger seat is also removable to place a 6-inch figure in the backseat! Car can fit three standard 6-inch Marvel Legends figures inside at once. We meticulously added as many design details as possible, including a trunk door that opens to hold Ghost Rider's accessories inside, wheels that roll and front wheels that can be manually turned to position the car in different ways, and an articulated skull gear shifter. The Engine of Vengeance vehicle has molded details on the bottom of the car and a high-gloss shine finish.

Hell on Wheels
For additional display capabilities, the Engine of Vengeance comes with two Brimstone Risers -- unique smoke-themed ramps that fit under either the two front or two back tires. Risers can be placed underneath the tires to give the impression of smoke billowing from the flaming wheels. They also work as ramps underneath the front tires to pose the car as though it is about to take off, inspired by the car's supernatural capabilities in the comics.

Robbie Reyes: A New Ghost Rider
In 2014, the Ghost Rider franchise met their newest hero in Robbie Reyes with All-New Ghost Rider Vol. 1: Engine of Vengeance. A teenager living in East Los Angeles and caring for his disabled brother, the course of Robbie Reyes's future was changed forever after he entered a street race using a muscle car, that unbeknownst to Robbie, was bound to an evil spirit. That fateful decision led to him being killed as collateral in a gang war and awakening imbued with the spirit of Eli Morrow. Robbie is then set on a path to fight for more than just vengeance, but justice -- and fighting Eli for his soul along the way. Empowered by a metal Hellfire Chain, his flaming car, and a wicked new spirit, Robbie Reyes is Ghost Rider.

For the first time in the Marvel Legends line, fans can collect the Robbie Reyes version of Ghost Rider. This 6-inch-scale figure features premium design and articulation, wearing a comics-inspired black racing suit. Ghost Rider's head has translucent orange flames that glow when he is placed in the driver's seat of the car and the LEDs are activated. Ghost Rider figure comes with pick hammer and crowbar accessories linked with a 5-inch real metal chain, inspired by Marvel Comics. Designed for the ultimate comics-inspired Ghost Rider display.

Early Bird Special: Double the Display Capability
Two modes of the Engine of Vengeance car call for two drivers. If the campaign reaches its minimum goal of 9,000 backers before 11:59 PM EST September 23, 2022 all backers will receive an additional Marvel Legends 6-inch scale figure: Robbie Reyes in his human form. The exclusive version of Robbie Reyes will feature changes to his outfit and his human head with a comics-inspired look. This means backers will have two distinct figures for each display mode of the car. If the project is not backed by 11:59 PM EST on September 23, 2022, the Robbie Reyes Human-Form figure will not go into production, and only the Ghost Rider figure of Robbie Reyes will be included with the offering.

The Drive to Vengeance
After the Marvel Legends Galactus and Marvel's Sentinel HasLab projects were funded, we started brainstorming new and different ways to enhance our fans' shelves and contribute a meaningful addition to your collections. With 2022 marking the 50th anniversary of Ghost Rider, we created the first premium 6-inch-scale automobile in the Marvel Legends line. The Engine of Vengeance HasLab project was the perfect opportunity to develop an impressive, premium vehicle to amp up our collectors' shelves. Vehicle stands at an impressive 18.5 x 7.5 x 5.5 inches (approximate) in Street Mode. Robbie Reyes is a fresh take on Ghost Rider and first-time addition to the Marvel Legends line, and we are beyond excited to offer him and his iconic car to Marvel fans.

Additional Unlocks
This offering doesn't stop with Ghost Rider and the Engine of Vengeance. We reached into the depths of the Marvel underworld to unearth additional unlocks exclusive to this HasLab campaign. Stay tuned to discover the wicked stretch goals to be announced. 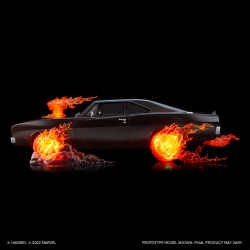 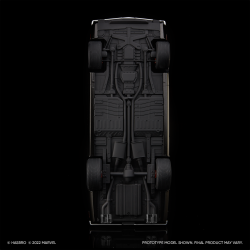 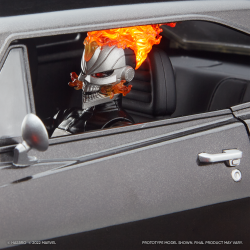 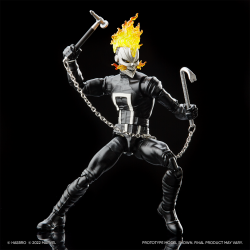 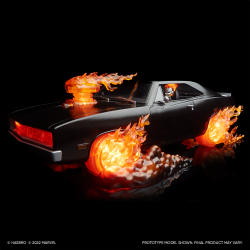 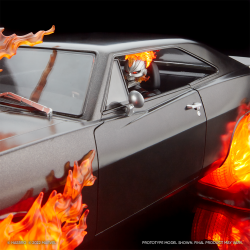 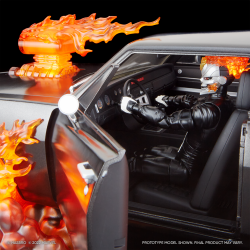 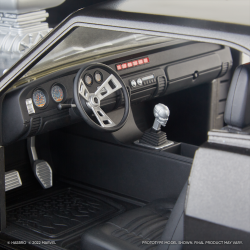 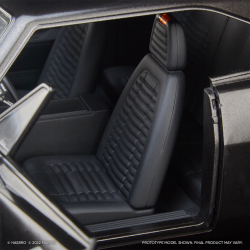 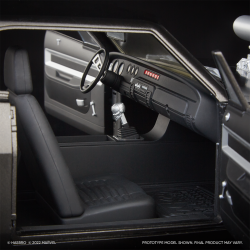 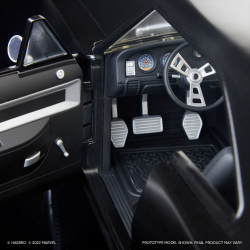 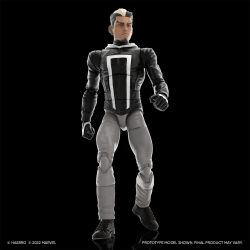 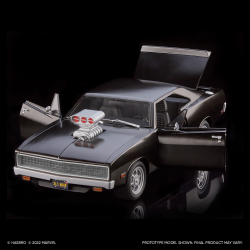 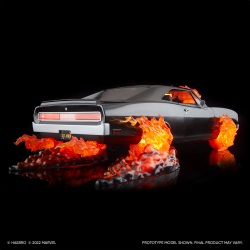 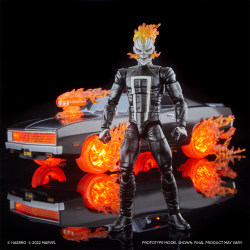 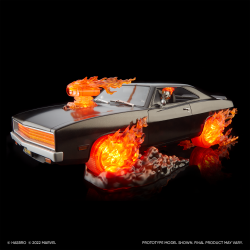 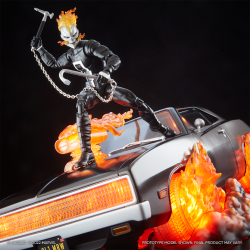 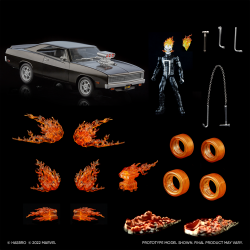 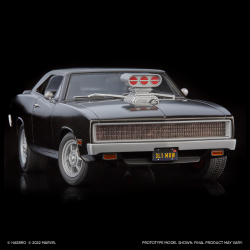 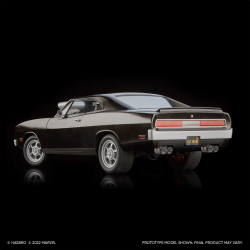