All hail Attack Peter! Our favorite (and only) linocut artist is back with a brand new handmade poster — the fifth in his Godzilla poster series — this time for 1972's GODZILLA VS GIGAN.

This film marks the first appearance of the excellent Gigan, our favorite cyborg space monster who has a giant buzzsaw on his belly and hooks for hands, as he and King Ghidorah enter a tag team battle against our hero Godzilla and Anguirus. Oh, plus they battle in an amusement park that has a giant Godzilla tower. These movies are the best.

And that's not the only kaiju poster this week! Friend of the family Tom Whalen is back with another entry in his own Godzilla series for 1965's INVASION OF ASTRO-MONSTER, in both a Regular and Variant edition. In this film, aliens from Planet X must borrow Monsters Zero One and Zero Two — a.k.a. Godzilla and Rodan — from Earth in order to defeat King Ghidorah. In return, they offer to provide humans for a miracle cure to all known diseases. Should we trust them? (Hint: No way!)

Attack Peter's GODZILLA VS. GIGAN and both the Regular and Variant Editions of Tom Whalen's INVASION OF ASTRO-MONSTER are available for purchase tomorrow 10/15 at 11AM (CT) via The Drop. 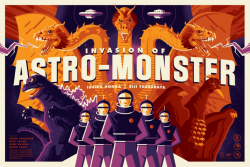 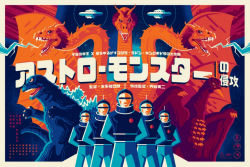