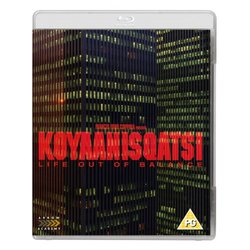 I want this to replace my Criterion set.

A fact some don't know:
Once upon a time two filmmakers (Godfrey Reggio & Ron Fricke) made a film called Koyaanisqatsi.
They had a falling out after this film. Ron Fricke was the Cinematographer and genius behind what made Koyaanisqatsi great. Reggio went on to milk the 'Qatsi' name, while the real genius, Ron Fricke, made his own movies that show that he was the brains behind Koyaanisquati and not Reggio.
After Koyaanisqatsi, seek out his films and not Reggio's lesser quatsi sequels.
Ron Fricke after Koyaanisqatsi - CRONOS (1985), BARAKA (1992), SAMSARA (2011).
Show hidden low quality content