Plot: Seven years after a “monsterpocalypse” forces all of humanity to move into underground colonies, Joel Dawson watches his fellow survivors pair off. He decides to brave the surface and face the monsters standing between himself and his high school sweetheart Aimee. Along his dangerous journey, Joel makes unlikely friends including a heroic dog and a pair of survivalists who help him survive the monster-infested road to true love. 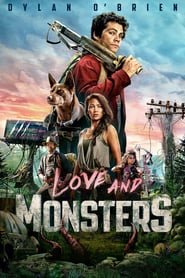 “Given the demand for new, high-quality entertainment right now, Paramount has decided to release Love and Monsters widely on digital platforms,” said Paramount COO Andrew Gumpert in a statement. “While we eagerly look forward to the reopening of movie theaters, we wanted to make this original and imaginative film available for everyone to enjoy at home.”

The movie becomes the latest studio production to head to VOD amid the continuing coronavirus pandemic. When lockdowns were first imposed across the U.S. in March and movie theaters nationwide closed, studios took some of their wares to VOD. Universal put Trolls World Tour andThe Hunt on the format while Warner Bros. debuted animated movie Scoob! that way. Other studios sold their slotted movies to digital streamers such as Apple TV+ or HBO Max. Paramount sold the Kumail Nanjiani-Issa Rae action comedy The Lovebirds to Netflix.

Monsters is set in a post-apocalyptic time when giant monsters have taken over Earth’s surface, forcing mankind into underground colonies. One young man (O’Brien) decides to risk it all to find his high school sweetheart (Jessica Henwick), and along his dangerous journey, he makes unlikely friends including a heroic dog and a pair of survivalists (Michael Rooker, Ariana Greenblatt) who help him survive the monster-infested road to true love.

Monsters, which shot on location in Queensland, Australia, is presented by Paramount Pictures in association with eOne. Shawn Levy and Dan Cohen produced via their 21 Laps banner.

Brian Duffield (Insurgent) and Matthew Robinson (Dora and the Lost City of Gold) wrote the screenplay, based on a story by Duffield. The film is directed by Michael Matthews who made his feature debut with the acclaimed Five Fingers For Marseilles, which premiered at the 2017 Toronto International Film Festival.

Dylan O'Brien doing what he does best... Running away from Monsters. haha

Was anticipating this but it still surprised me. To me it would be worth picking up in Steelbook.
M

jcm said:
Was anticipating this but it still surprised me. To me it would be worth picking up in Steelbook.
Click to expand...

Watched it last night and would definitely buy a steelbook of it as well. Just a fun movie all around.
Reactions: spass and vexred

For anyone who didn't get to see this outside the USA. Looks like its coming to Netflix April 14th.