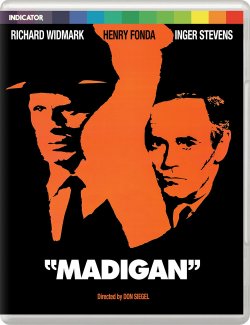 Madigan teams Hollywood legends Richard Widmark (Pickup on South Street, Two Rode Together) and Henry Fonda (Young Mr. Lincoln, Midway) in a brutal tale of crime set in Spanish Harlem. As Commissioner Russell tries to keep his precinct in order, detectives Madigan (Widmark) and Bonaro (Harry Guardino) struggle to balance their personal and professional commitments when they are given just 72 hours to apprehend the spree killer who has stolen their weapons.

Directed by Don Siegel (Charley Varrick, The Lineup) immediately prior to his acclaimed collaborations with Clint Eastwood, Madigan is typical of the director's tough, no-nonsense style, bridging the gap between classic film noir and the gritty police procedurals of the 1970s. Also boasting a script co-written by once-blacklisted writer Abraham Polonsky (Body and Soul, Force of Evil), Madigan's success led to its being turned into a television series.


All extras subject to change