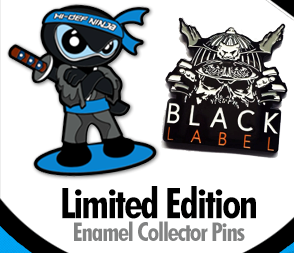 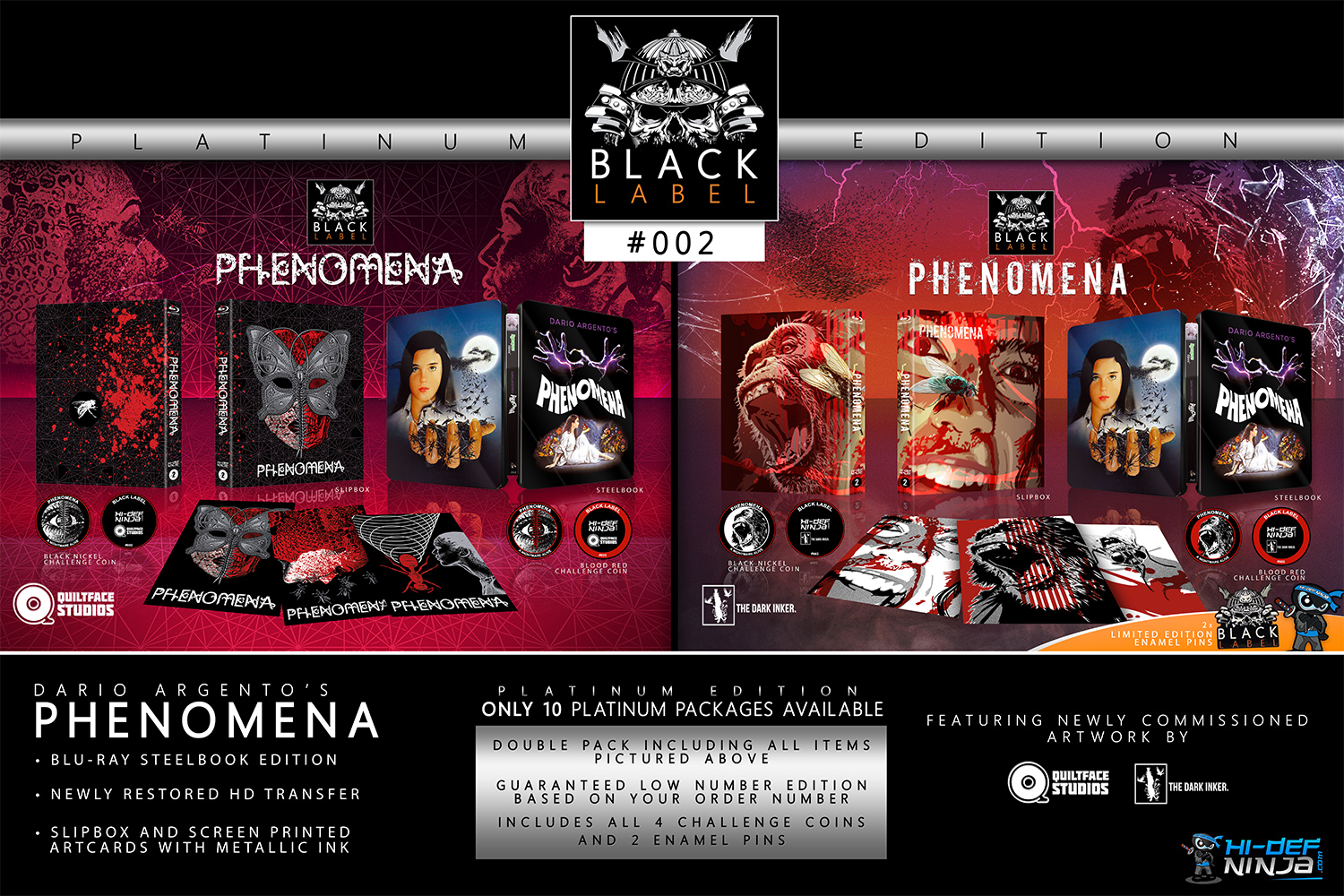 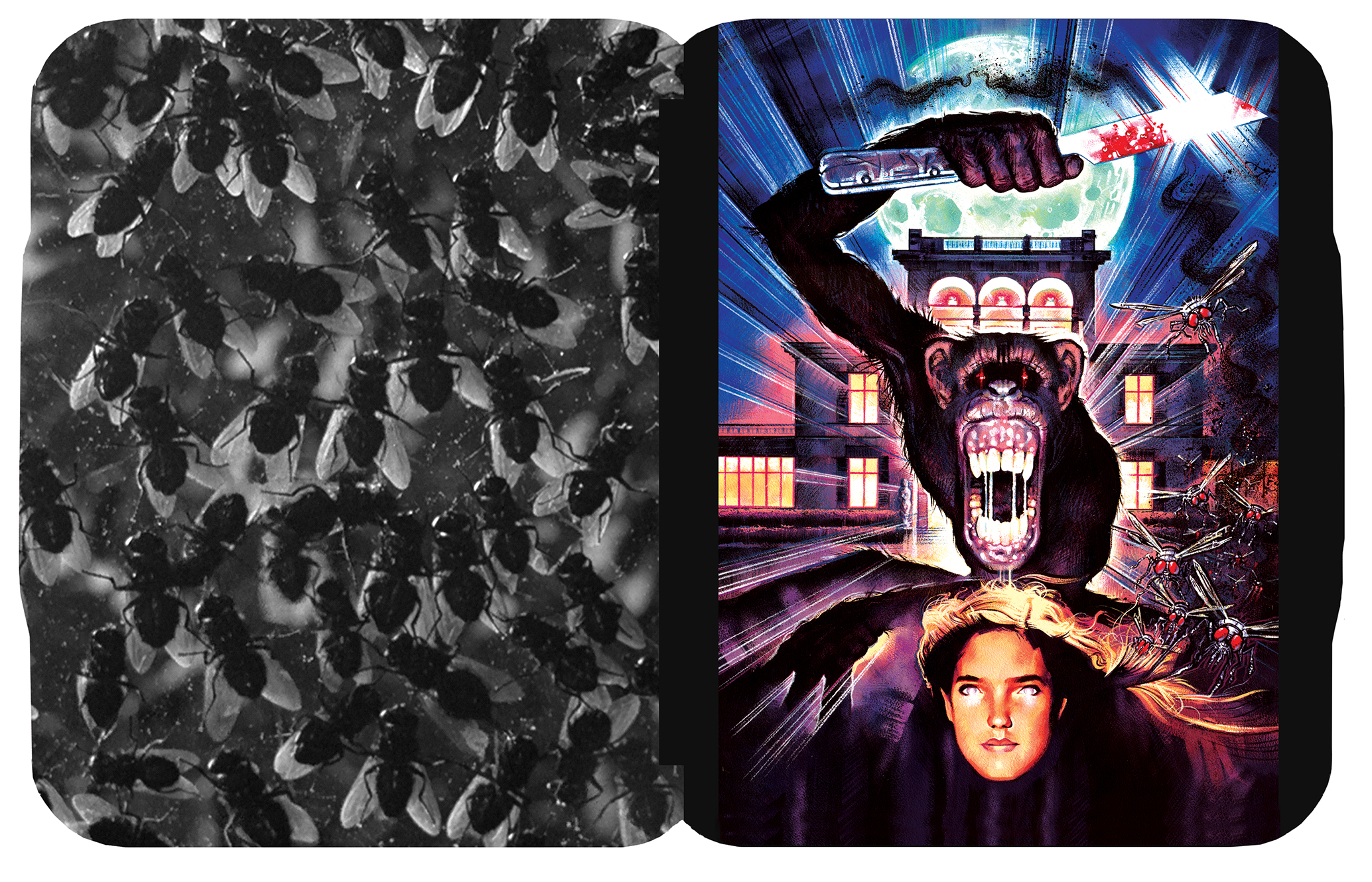 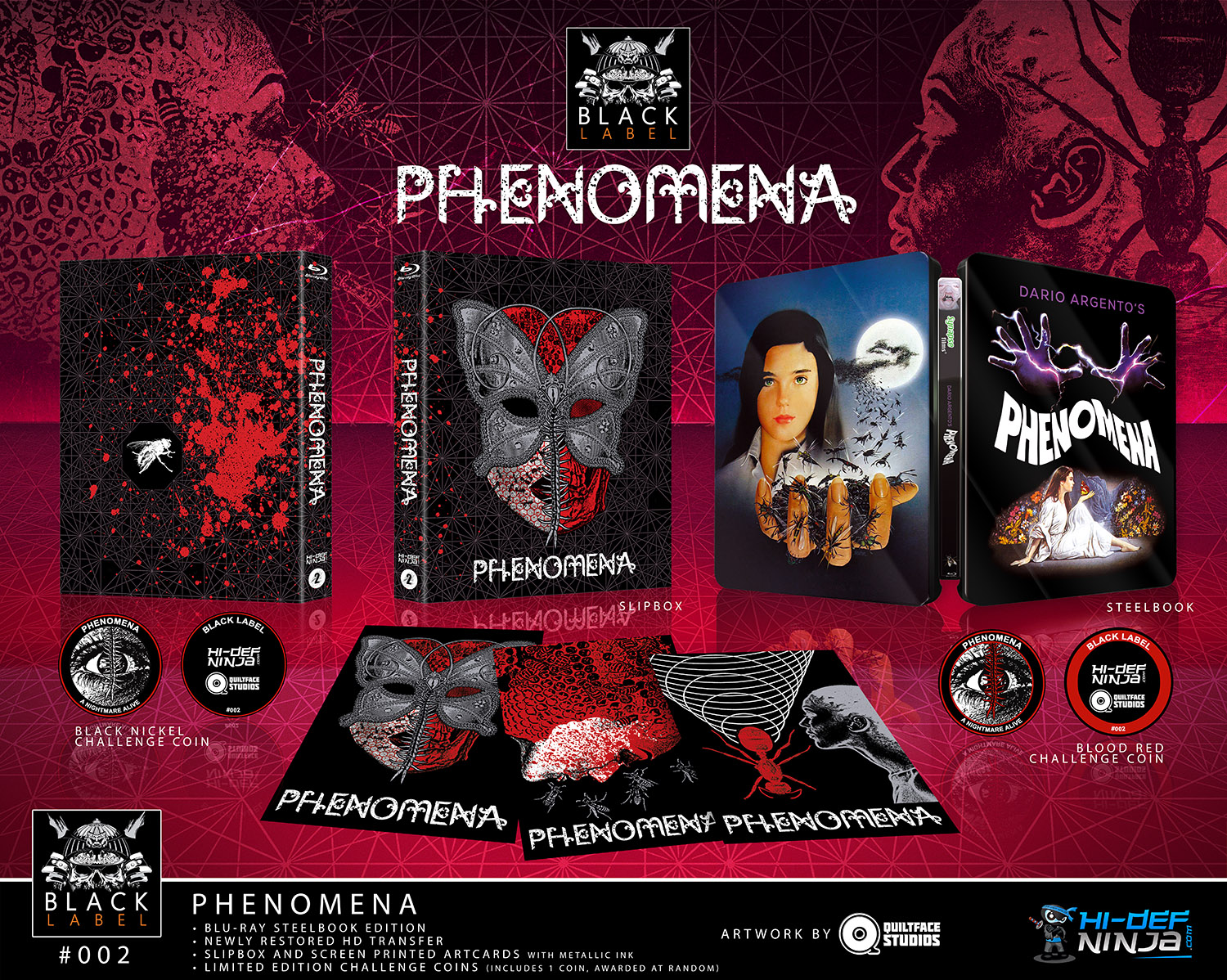 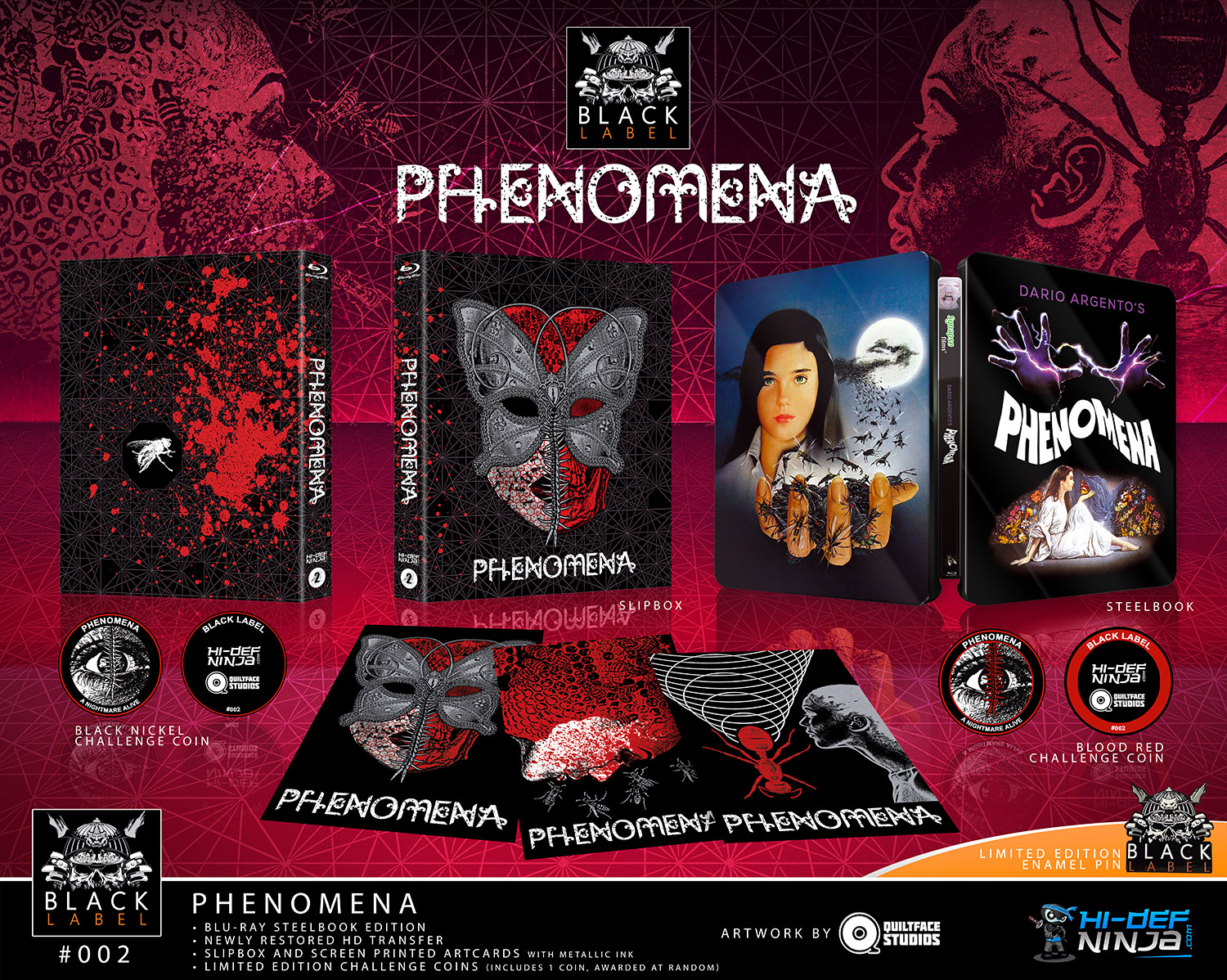 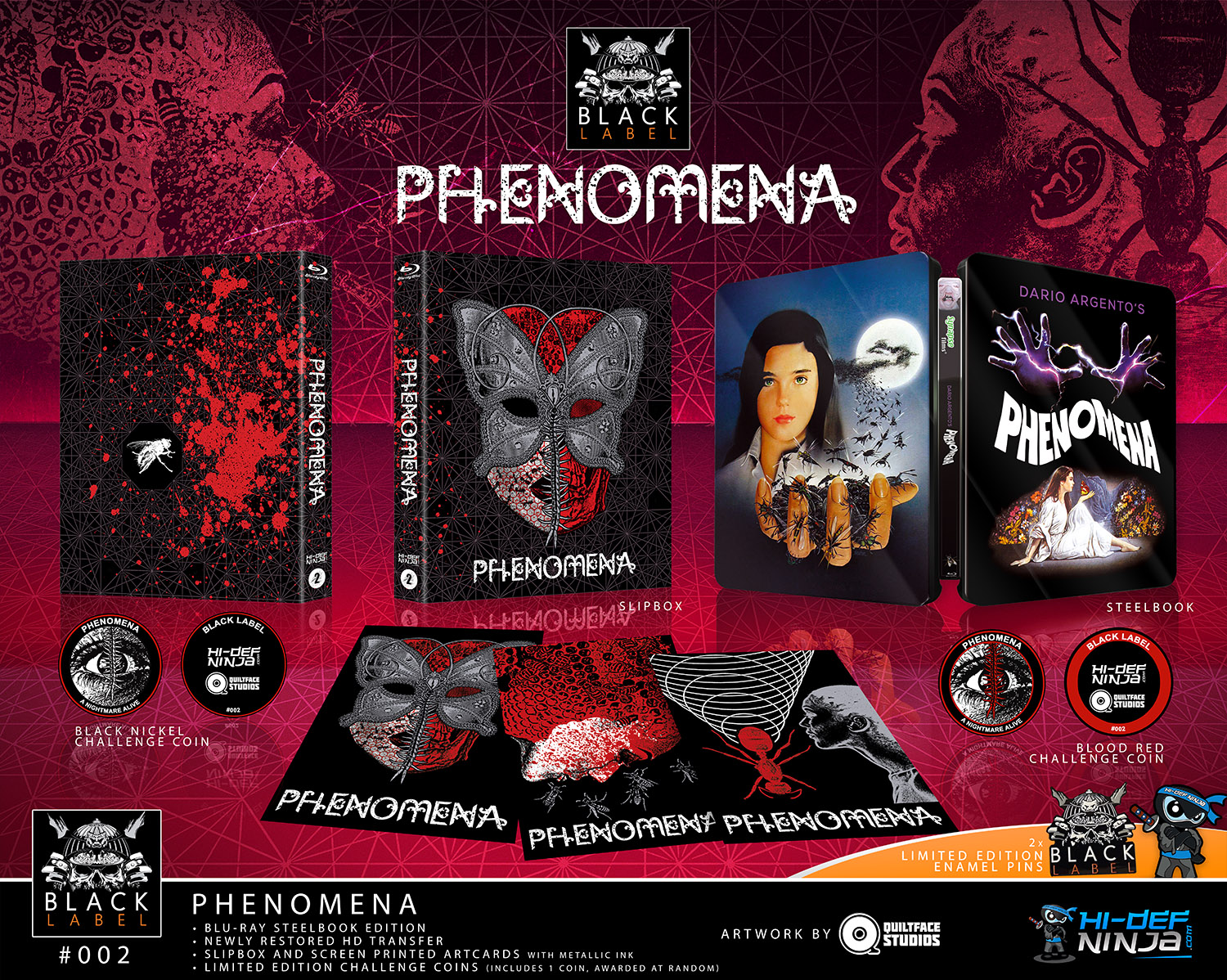 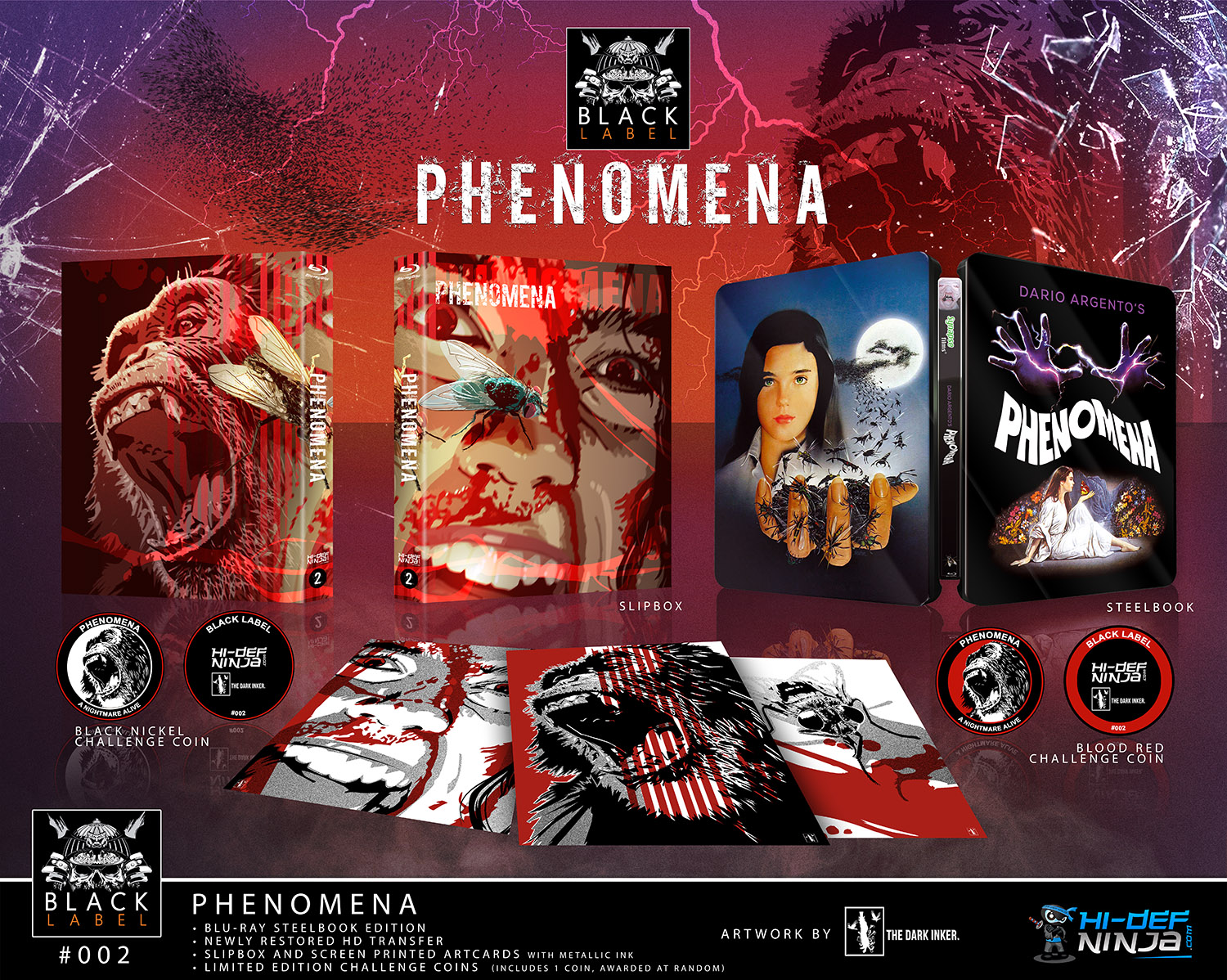 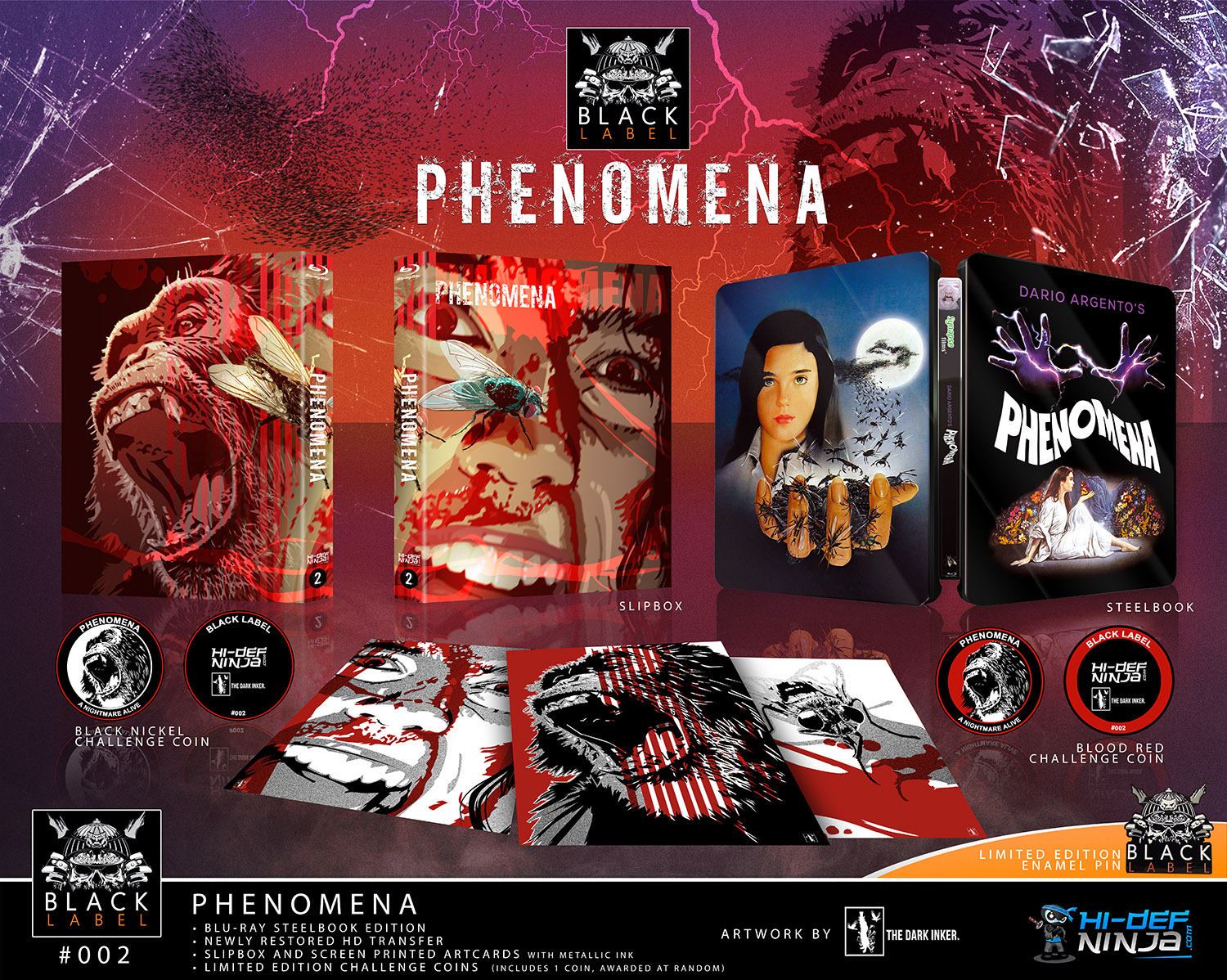 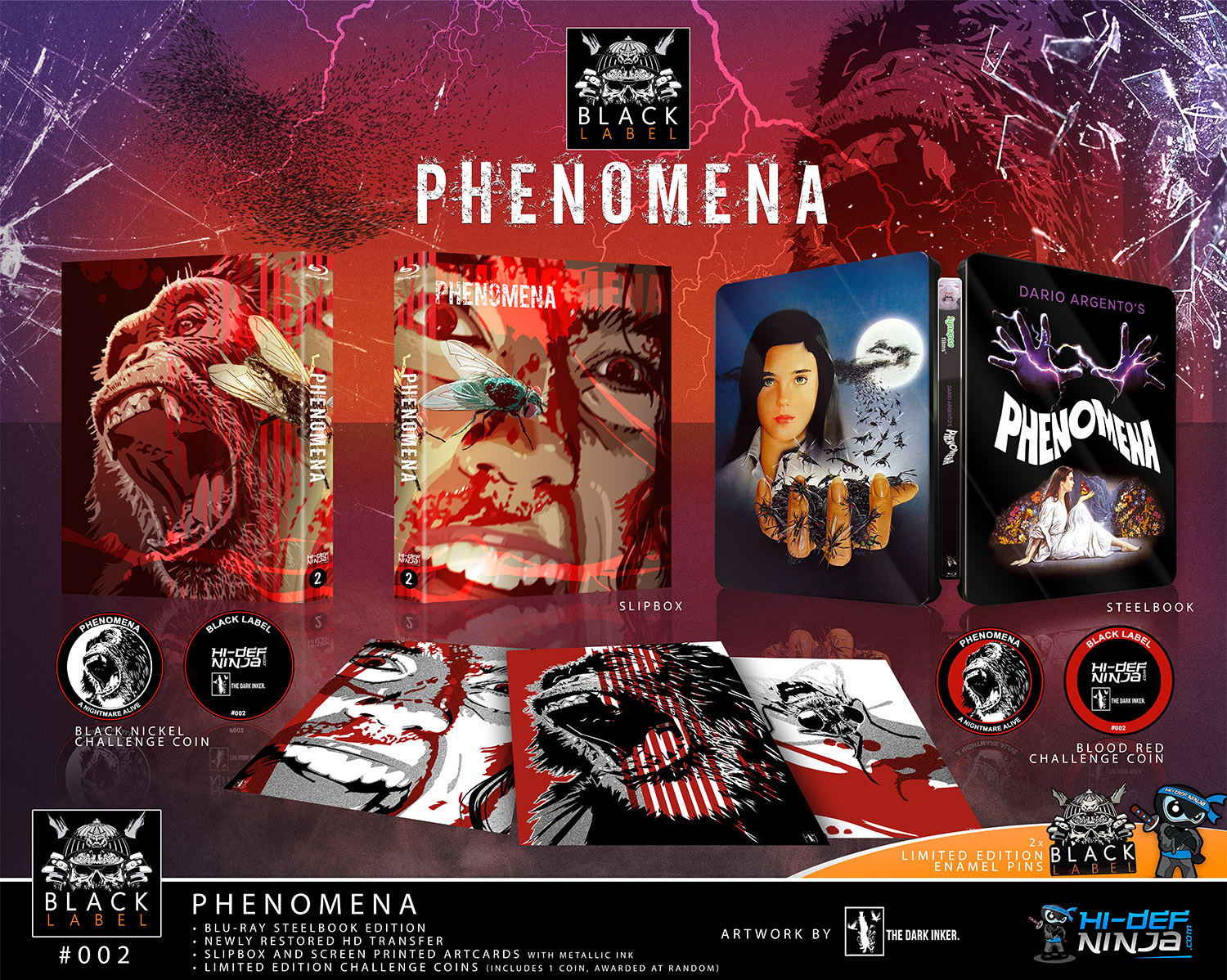 DISC DETAILS FROM SYNAPSE:
One of legendary filmmaker Dario Argento’s most shocking and fantastic films is finally available on Blu-ray in the U.S. in an amazing new release from Synapse Films! Released in the U.S. as CREEPERS by New Line Cinema, 1985’s PHENOMENA is has long been one of Argento’s most discussed and debated films by fans and scholars, and now it’s available in a definitive 3-disc Steelbook® that will make it a must-have release for Argento fans all over the world!

The young Jenifer Corvino (played by Oscar-winning actress Jennifer Connelly, in one of her first film roles) is sent to a private Swiss academy for girls where a vicious killer is on the loose, brutally murdering students. Jennifer is a “gifted” girl with the strange ability to communicate with insects, and Dr. McGregor (Donald Pleasence, John Carpenter’s HALLOWEEN series, ESCAPE FROM NEW YORK) enlists her to help locate the killer. Jennifer finds herself in a bizarre murder plot with maggots, mutants, and razor-wielding chimpanzee mayhem! Can she uncover the killer’s identity before becoming a victim herself? Daria Nicolodi (TENEBRAE) and Fiore Argento (DEMONS) also star in this strange, unique and gory film from Italy’s Master of Horror, Dario Argento. PHENOMENA also features fantastic soundtrack music from progressive-rock favorite Goblin, British Heavy Metal masters Motörhead & Iron Maiden, Andi Sex Gang, Bill Wyman and Simon Boswell!

This English/Italian hybrid cut of PHENOMENA contains an additional six minutes of material not seen in the 110 minute version. Completely remixed by Synapse Films to seamlessly integrate the additional Italian audio segments into the feature, and remastered in high-definition, this version of PHENOMENA is now available for the FIRST TIME EVER in North America!

DISC 1 SPECIAL FEATURES INCLUDE:
Synapse Films is proud to present the U.S. version of CREEPERS, now available for the FIRST TIME EVER remastered in high-definition (1080p 1.66:1 Presentation). Includes optional English subtitles for the Deaf and Hard of Hearing.

This international version of PHENOMENA was released in 1985 and contains almost 30 minutes of additional footage not seen in the CREEPERS U.S. version. Completely remastered in high-definition and released, for the FIRST TIME EVER, on Blu-ray!

SUBTITLES: English Subtitles for the Deaf and Hard of Hearing


DISC 2 SPECIAL FEATURES INCLUDE:
A fascinating look at the early films of director Dario Argento, including PHENOMENA, SUSPIRIA, DEMONS, DAWN OF THE DEAD, INFERNO and many more! Containing candid interviews and awesome behind-the-scenes footage, DARIO ARGENTO’S WORLD OF HORROR gives us a look into the mind of Italy’s Master of Horror and is an essential viewing experience for all Argento fans.

This original motion picture soundtrack contains the complete 16 track Goblin instrumental score for PHENOMENA, along with four additional music tracks from Andi Sex Gang and Simon Boswell. This CD, exclusively available from Synapse Films, is the first time these music tracks have been included on the same CD compilation.

Last edited by a moderator: Jan 8, 2017
Reactions: Paperinukke, bigballas01, wouter and 37 others

Come on Exorcist in a nice slip!

Bring On The Horror!

Looking forward to the reveal!

Not even one clue to keep us talking?

Announcement and pre-order coming tomorrow, thanks all!
Reactions: Dano, Marco86, Punker76 and 5 others

hopefully this time its more appealing to me than edition #1

Limited to 400, fyi.
And thanks for supporting and contributing to our horror content on the site, including our 24-7 Horror forum! 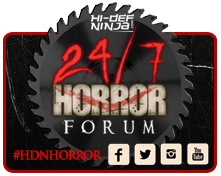 Strangerbyday said:
Quick question, I know Black Label 1 was Region A only, will this one be Region A only also?
Click to expand...

Thanks Stranger, we have to wait until tomorrow, as requested to post all other info. Thanks!
Reactions: Strangerbyday and Marco86

The marketing is very different this year compared to the number 1 last year. Seems very quiet

Looking forward to the reveal and I've collected all HDN exclusives but depending on funds I may have to miss it
Click to expand...

Thanks Floy! Yes, each release and partnership is different. This company had a completely different timeline and approach and we were bound by confidentiality so absolutely nothing could be announced in advance. Thanks for your support, we always appreciate it!
Reactions: Flloydo

digitalbabe said:
Thanks Floy! Yes, each release and partnership is different. This company had a completely different timeline and approach and we were bound by confidentiality so absolutely nothing could be announced in advance. Thanks for your support, we always appreciate it!
Click to expand...

I'm guessing the art is WWA of a previous release and not new art like Tenebrae? Like say Arrows The Beyond.....

Or could it be linked with a new horror film coming out like conjuring 2 and you guys have 400 of them to add slips and goodies to.