Who you calling cute?

This year marks the 20th anniversary of Cartoon Network's THE POWERPUFF GIRLS, and tomorrow we're thrilled to celebrate the crime-fighting trio with a collection of posters and pins.

Created by Craig McCracken in 1998, the series follows the adventures of three superheros: Blossom, Bubbles, and Buttercup. The three girls were created by Professor Utonium after an accidental mixture of “sugar, spice, and everything nice” combined with the mysterious Chemical X in an attempt to create the perfect little girl. We’re big fans of this excellent animated series and are excited to release our first collection of products celebrating everyone’s favorite little superhero sisters.

First up we’ll have two awesome new posters for the series by Dave Perillo and Glen Brogan, respectively, highlighting the many memorable characters and villains encountered by the PowerPuff Girls. In addition to these posters, we’ll also have a new enamel pins available including Blossom, Bubbles, Buttercup, and their nemesis and future world leader, Mojo Jojo.

These posters and pins will available at a random time before bedtime on Thursday, (10/25) via mondotees.com. 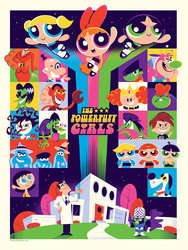 POWERPUFF GIRLS by Dave Perillo. 18"x24" screen print. Hand numbered. Edition of 200. Printed by DL Screenprinting. Expected to Ship in January 2019. Ships to US Addresses Only. $45

"I’ve always loved the colors, style and design of the characters created by Craig McCracken - they have such a vintage vibe with a modern twist, especially with the Powerpuff Girls. The show also seemed to capture that old Hanna Barbera vibe, like it could have easily aired alongside the FLINSTONES and WACKY RACES, back in the day." -Dave Perillo 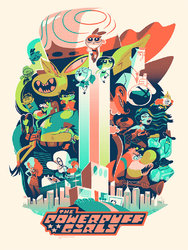