“Ripple” is a zenlike print--placing AJ’s travelling skeleton in calming water, surrounded by wildlife and wildflowers--created with a relaxing color palette. Per AJ, “‘Ripple’ began as an exercise in life drawing, working from a human skull in my studio. With a very zen approach, I had no intentions or master plan for the piece, simply letting the drawing take me where it wanted to go. It wasn’t long before ‘Ripple’ began revealing itself and that ‘path for my steps alone’ became clear. I dug a bit deeper into the meaning behind the lyrics coming across a beautiful write-up by David Dodd on Dead.net. Here Dodd ponders Robert Hunter’s intentions, evoking imagery of the Far East and an overarching theme of the cycle of life. I also find there is a certain succumbing to nature aspect to the song, not fighting your path, embracing it whatever it may be, the ultimate hippie mantra of Going with the Flow… “

AJ’s prints will be available for purchase on Wednesday (1/27) @ 12PM ET on our homepage, Bottleneckgallery.com! 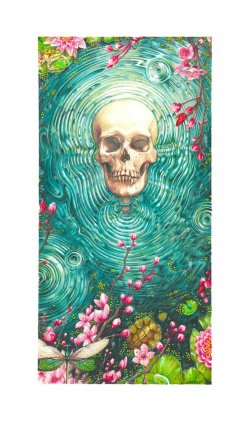 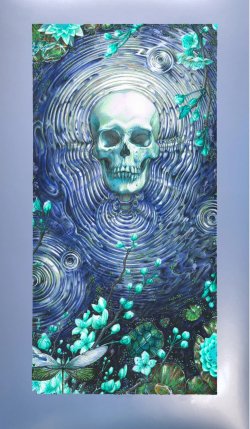 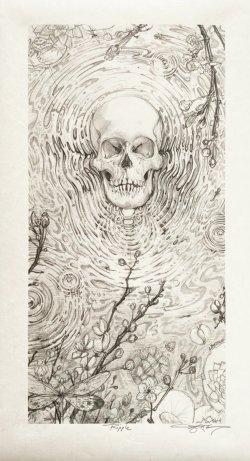 Bottleneck Gallery [Vice Press] Back to the Future by Oliver Rankin