Per Wreck here on Aug 5: Gloss and debossed titles. 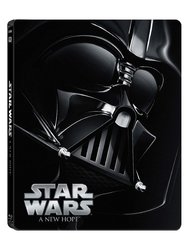 Great news always wanted individual steelbook releases for Star Wars episodes. Will be tempted with a GB - but now imagine if FilmArena get this in their FilmArena Collection

Reactions: InAFalsetto, Hooch, ty233 and 2 others

Despite The Walt Disney Company's 2012 purchase of Lucasfilm Ltd. and the release rights to all future Star Wars films, Fox still retains original distribution rights to Star Wars: Episode IV A New Hope "in perpetuity" in all media worldwide. Fox also retains theatrical, nontheatrical, and home video rights worldwide for the franchise's five subsequent films through May 2020, at which time ownership will transfer to Disney. This complex relationship between Fox and Disney, particularly in regards to Fox's perpetual rights to Episode IV, creates an obstacle for any future boxed set comprising all nine films.
Click to expand...

Just putting this here to clear up any confusion people might have over this issue. Which might also explain why this is the only $19.99 steelbook (all the others, at the moment, are $24.99)

Hopefully they will use Drew Struzan art.
Reactions: InAFalsetto

Sorry to burst your bubble, but this news is fake.
A

Awesome. Poster artwork on the steelbook please!! (oh, and please no cropping of the image as per the Zavvi BttF original trilogy steelbooks...)

Maybe one of the best films of all time, please don't mess this up. Original poster art with a high gloss finish and the star wars embossed on the front or back

Even if that is fake, I'm still hopeful that there will be a "non-bastardised" version of the SW films at some point - hopefully to coincide with a 3D conversion...

Will keep an eye on this. Even with the films in their current state they still deserve top quality steelbooks.
Reactions: BluSteel2012

Do the artwork right, you will.

Get in here @bantha11

Reactions: Drum18 and halliwell
A

Oh God, I hope not- Iconic movies deserve to have the original poster artwork or something to that degree- If we get episodes I-VI all featuring a different character on the front that would be hugely disappointing...

Andycadle84 said:
Oh God, I hope not- Iconic movies deserve to have the original poster artwork or something to that degree- If we get episodes I-VI all featuring a different character on the front that would be hugely disappointing...
Click to expand...