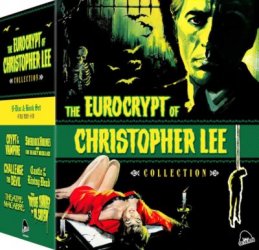 Disc 1: The Castle of the Living Dead (1964)
In the final film of his early ‘60s European period, Christopher Lee stars as a 19th century Count who invites a theatrical troupe for a weekend of horrors that boasts an enthusiastically creepy performance by Lee, startling locations in Lazio, Italy’s Orsini-Odescalchi Castle and ‘Park of the Monsters’, second-unit direction by Michael Reeves (WITCHFINDER GENERAL) and the screen debut of Donald Sutherland as both a doofus gendarme and a hunchbacked hag. Philippe Leroy (THE NIGHT PORTER) and Jacques Stany (VIOLENCE IN A WOMEN’S PRISON) co-star in this 1964 French-Italian co-production from American producer Paul Maslansky – who would go on to produce DEATH LINE and the POLICE ACADEMY movies – and fellow expat writer/director Warren Kiefer – after whom Sutherland would name his son – now scanned in 4K from the Italian negative for the first time ever.

Special Features:
Disc 2: Challenge the Devil aka Katarsis (1963)
In the most obscure film of his early ‘60s Italian period – if not his entire career – Christopher Lee stars in this brilliantly bizarre combination of neo-realist crime thriller, tawdry Christian melodrama, fizzy cabaret musical and trippy gothic horror, culminating in a gang of bongo-crazed delinquents menaced by a white-haired Lee as a sinister Victorian who may be Satan himself. George Ardisson (HERCULES IN THE HAUNTED WORLD) stars in this staggering 1963 oddity that marked the sole screen credit of writer/director Guiseppe Vegezzi, who attempted suicide shortly before its release. Also known as KATARSIS and little-seen for over 50 years, it is now scanned in 2K from the Italian negative for the first time ever.

Special Features:
Disc 3: Crypt of the Vampire (1964)
n a lavish gothic shocker inspired by Sheridan Le Fanu’s immortal novella Carmilla, Christopher Lee delivers a rare ‘hero’ turn as nobleman Count Karnstein whose foreboding castle teems with ancestral curses, unnatural desires, philosophical hunchbacks and grisly acts of vengeance. Adriana Ambesi (FANGS OF THE LIVING DEAD) co-stars in this 1964 Spanish-Italian co-production – also known as TERROR IN THE CRYPT and CRYPT OF HORROR – directed by Camillo Mastrocinque (AN ANGEL FOR SATAN) as Thomas Miller & Robert Spafford from a screenplay by giallo master Ernesto Gastaldi (ALL THE COLORS OF THE DARK) as Julian Berry and Sergio Leone protégé Tonino Valerii (MY NAME IS NOBODY) as Robert Bohr, now featuring a 2k scan from a fine-grain 35mm master print.

Disc Specs:
Runtime: 85 mins
Audio: English & Italian Mono / Closed captions
Region A
Aspect Ratio: 1.85:1
Special Features:
Disc 4: Sherlock Holmes and the Deadly Necklace (1962)
Shortly after their hit collaboration on THE HOUND OF THE BASKERVILLES, Christopher Lee and director Terence Fisher (HORROR OF DRACULA) returned to Holmesiana for Lee’s sole feature film portrayal of the world’s greatest detective. Shot in Berlin with Hammer regular Thorley Walters as Dr. Watson, Lee considered it to be “one of the best things I’ve ever done because I tried to play Holmes really as he was written – as a very intolerant, argumentative, difficult man.” Senta Berger (WHEN WOMEN HAD TAILS) and Ivan Desney (THE MARRIAGE OF MARIA BRAUN) co-star in this 1962 West German-French-Italian co-production produced by Artur Brauner (VAMPYROS LESBOS) from a screenplay by Curt Siodmak (THE WOLF MAN) and based on Sir Arthur Conan Doyle’s Valley Of Fear, now scanned in 2K from the German negative.

Disc Specs:
Runtime: 86 mins
Audio: English & German Mono / English subtitles on German, closed captions on English
Region Free
Aspect Ratio: 1.66:1
Special Features:
Discs 5 & 6: Theatre Macabre (1971-1972)
Christopher Lee hosted this anthology television series originally produced by Film Polski (KNIFE IN THE WATER, THE TIN DRUM) in the tradition of ALFRED HITCHCOCK PRESENTS and BORIS KARLOFF’S THRILLER. Lee delivers the intro and outro for each half-hour at his imposing and often cheeky best, while the tales themselves – adapted from stories by Poe, Dostoevsky, Ambrose Bierce, Robert Louis Stevenson and Oscar Wilde – are written and/or directed by filmmakers that include Andrzej Zulawski (POSSESSION) and Academy Award® winner Andrzej Wajda (MAN OF IRON). Dubbed into English and featuring ‘additional dialogue’ by Jesse Lasky Jr. (THE TEN COMMANDMENTS, 7 WOMEN FROM HELL) with new theme music by Ron Goodwin (VILLAGE OF THE DAMNED, FRENZY), it has remained largely unseen since its brief airing on American TV in 1971. These 24 surviving episodes have now been scanned in 2K from the original negatives.

Disc Specs:
Runtime: 610 mins
Audio: English Mono / Closed captions
Region Free
Aspect Ratio: 1.33:1
Special Features:
Disc 7: The Torture Chamber of Dr. Sadism (1967)
Christopher Lee stars as Count Regula, an insane nobleman found guilty of murdering a dozen virgins and drawn-and-quartered for his crimes. But when a lawyer – former Tarzan Lex Barker – is summoned to the Count’s castle 35 years later, he will unlock a “wildly entertaining” (Buried.com) odyssey of torture, dismemberment and creepy Bavarian locations that is equal parts Mario Bava and Hieronymus Bosch. Karin Dor (YOU ONLY LIVE TWICE) and Dieter Eppler (SLAUGHTER OF THE VAMPIRES) co-star in this 1967 “underrated gem” (The Telltale Mind) – also known as CASTLE OF THE WALKING DEAD, BLOOD OF THE VIRGINS and THE BLOOD DEMON – directed by krimi veteran Harald Reinl and loosely based on Poe’s The Pit & The Pendulum, now scanned in 4K from the original German negative with all-new Special Features.

Ordered this as soon as it went live.
Very excited to fit this set in beside my other Lee collections.