Happy New Year! We've been hard at work over the holidays getting projects together for 2020 and thought we'd start the year off with a release we haven't touched on yet. GMA, in association with Warner Bros. and Bottleneck Gallery, is pleased to release the 1999 American Animated Science-Fiction Film, "The Iron Giant" by UK illustrator and designer, Chris Thornley (Raid71)! Based on the 1968 novel "The Iron Man" by Ted Hughes, "The Iron Giant" shows the phenomenal directorial debut of Brad Bird who has always been a personal favorite filmmaker of ours! Chris did a beautiful job recreating the scene of the Giant's interaction with the deer, where you truly get a sense of his curiosity and wonderment. "The Iron Giant" will be released as a 24 x 36-inch Screen-Print containing two editions, a Regular Edition Foil and a Variant Edition Foil!

"The Iron Giant" by Chris Thornley Goes On Sale Thursday, January 16th at 1 PM ET in the GMA Shop! 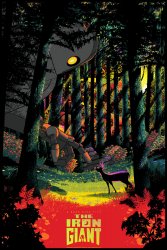 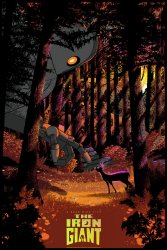