From Star Wars to Indiana Jones, Gabz’ ability to capture classic film trilogies in a single print is unparalleled, and his newest triptych print is a new zenith in his art. Gabz’ The Lord of the Rings triptych is a meticulously crafted love letter to both J.R.R. Tolkien and Peter Jackson, combining characters, world building, and memorable moments, all tied together by a beautiful framing flourishes fitting the stories’ aesthetic.

Per Gabz, “Even the smallest person can change the course of the future”

I’m super excited to finally be able to share with you guys my take on Peter Jackson’s “The Lord of the Rings” trilogy. It was quite a journey…

J. R. R. Tolkien has been a significant part of my childhood since my father read it to us back and forth when we were kids, but I also remember how impressed and mesmerised I was with Peter Jackson’s adaptation when it hit the theatres. Great costumes, casting, spectacular visuals, music and storytelling throughout. As difficult as it turned out to be, I knew I wanted to fit the entire trilogy on a single artwork, similarly to my previous releases with Bottleneck Gallery for both Star Wars and Indiana Jones triptych prints. My main inspirations were Renaissance paintings (triptych compositions mainly) and to some degree classic fantasy illustrations, but of course I did want to give it my personal touch. With the main focus on Frodo, Sam and their journey to Mordor, I tried my best to include as many characters and crucial locations as I could… though some tough choices had to be made. Nearly 4 months of hard work during which 20 separate pencil drawings were created, later scanned and combined in Photoshop where I also applied colors, shading and polished all the necessary details and likenesses.

Big shout out to everyone that helped or advised me along the way: including my brother Krzysztof who helped with the title, my good buddy Tomasz Lassota who did the color separations, to my pal Piotr Buczkowski for 3D renderings and last but not least to the biggest Tolkien fan I know Michał Czapski, who’s input in the first stage of sketching in particular was extremely helpful. Thank you all!”

All prints are estimated to ship in 8 - 10 weeks. You can follow updates on our new update page. 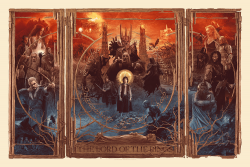 The Lord of the Rings Triptych by Gabz
20 color screen print with metallic inks
36 x 24 inches
Hand-numbered timed edition
Edition size will be determined by the number of print sold
through Sunday, December 13th @ 11:59PM ET
$65 / Set $215
Estimated to ship in 8 - 10 weeks 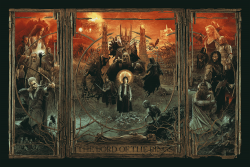 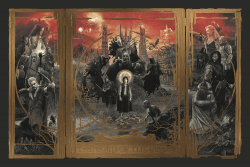 I was able to grab a set in the bottlebux email

We wanted to send over a quick update on the Gabz LOTR shipping process.

As some of you might have seen, all variants have safely landed at the gallery. We will start prepping shipment for the non-foil variant tomorrow. Regular timed-edition prints will be shipped in batches to the gallery. These will take a bit longer. We will send another update once they have all been sent to us from the printer. Foil variants will also start to arrive with the regular timed-edition prints.

We know this print might have been the first purchase for many of you from us and we apologize for exceeding the estimated shipping timeline of 8-10 weeks. When we start a timed-edition sale, we try to figure out how many prints we will sell and the time-line to produce that quantity. Sometimes, the sales exceed our original estimate, as has happened with this print. On top of the increased demand, these are also 20-color screen prints which take a lot longer to produce, so those two things have delayed the shipping process beyond our original estimate.

Hello previous buyers of Gabz’ Lord of the Rings Triptych print! Everybody should have their new prints in hand by now, so we wanted to reach out to you directly to thank you for your patience and civility while we dealt with reproducing and reprinting an entire run of Gabz’ epic print. We apologize for any delays or issues this reprint may have caused, but we’re infinitely thankful to everybody for sticking with us as we worked with our printers, VGKids, to create some truly special screen prints.

As was teased during the reprint saga, we’ve decided to create a 24-hour timed variant edition of giclee prints of Gabz’ The Lord of the Rings Triptych image available exclusively to previous buyers of the screen print editions. As a special thank you to our illustrious printers, VGKids, and Gabz, all profits from this edition will be split among VGKids and Gabz.

If you have any questions about any of this, please feel free to email us at anytime.

There is NO LIMIT to the number of prints that you can purchase during this 24hr time release. Very nice. shame it's only for previous buyers

Bottleneck Gallery The Lord of the Rings: The Fellowship of the Ring by Jake Kontou

Bottleneck Gallery Lord of the Rings by Conor Smyth