As part of the convention schedule, along with artist and co-founder Matt Ferguson, Vice Press will be taking part in an online panel talking a little about what goes on behind the scenes, upcoming releases and what to expect next, as well as answering a few questions from the audience. But what would a convention be without some new releases? On Saturday the 5th of September Vice Press will be releasing two brand new prints, The Thing by Tom Whalen and Jaws by Matt Ferguson. The Thing is limited to a regular edition of 190 and a variant edition of 120 while Matt’s Jaws poster is part of Vice Press’ new Editions range and will be an open edition. However, there is always the possibility of a freebie for the first 100 Jaws orders…

Both prints will officially be released via Vice Press’ website (www.vice-press.com) at 5pm BST (UK)/ 12pm EST/ 9am PST. However for those of you who tune in to the panel, there may well be the possibility of a pre-sale link… 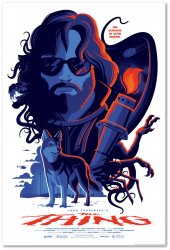 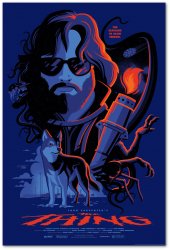 The Thing Variant by Tom Whalen
Variant Edition of 120
24x36 inches
Screen Printed by The Half & Half
£55 (Approx $76.00)
Show hidden low quality content